Landing a summer internship is a crucial point for business school students who are plotting their career trajectory in full-time banking. In the first post of this four-part series, one Wharton undergrad takes us with her as she faces her first interview.

It was the night before my first-ever banking interview. The whole campus was buzzing about the bomb threat posted on 4chan threatening to “take arms against a University near Philadelphia” at 1 p.m. CT. I conferred with my roommates, and we decided we weren’t going to class the next day: the risk was too great. Besides, it would give me the morning off to study for my Barclays phone interview.

I didn’t have reliable cellphone service in my room, so the next morning I nervously sat in my friend’s room and hammered out the final touches on my “story,” watching the clock creep toward the time of the bomb threat and my phone interview. 2 p.m. came and went without incident—it looked like Penn was safe from any bombs. I had a long list of bullet points ready to answer common banking interview questions, which of course included my “story” for why I wanted to do investment banking at Barclays. Across the room, my friend snored in his bed. I was as ready as I would ever be.

Right on time, my phone lit up with a call from New York. I took a deep breath and picked up.

The interview blew by—I breathlessly answered all of my interviewer’s questions, forgetting about the pages of notes I had prepared, the musty room I was sitting in, the headphones around my ears. I could feel my heart racing like I was playing in a tournament as I fielded the finance and behavioral questions. When my friend woke up, the 50-minute interview was done and my padfolio was filled with a full page of notes from the call (so I could send my interviewer a detailed and memorable thank-you email, of course).

“How was it?” he said, his voice muffled by the pillow.

“I think it went really well!” Two weeks later, I was invited to Barclays’ headquarters in New York for the final round interview.

The most concrete element of recruiting was probably the overwhelming purple in my calendar: the color I used to mark On Campus Recruiting (OCR) events. Like a life-size game of Tetris, each OCR task was fitted between the other time blocks in my calendar: class, midterms, extracurricular activities, work, physical therapy (but noticeably overlooking time for food, sleep, and homework). There were endless phone calls, dinners, information sessions, mock interviews, coffee chats, and more…. 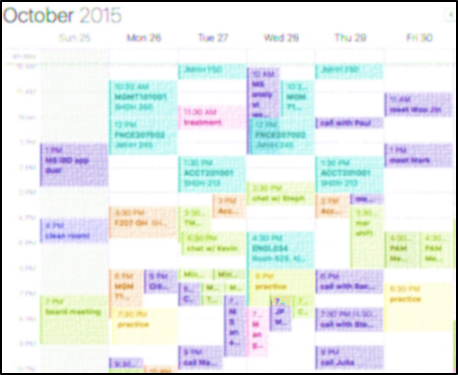 But I couldn’t complain because as a junior, this was the year of recruiting. It was even more important than senior recruiting. Most seniors got their full-time offers after their internship; not having a junior-year banking internship would make full-time banking recruiting virtually impossible. Hence: our anxiety and intense focus on securing a prestigious internship.

As the day of the Barclays final-round interview drew closer (colloquially known as a “Super Day”), I spent an increasing amount of time on the phone with the company’s analysts. My friends mocked me a little; of the bulge bracket investment banks, Barclays didn’t seem to be as respected. “Why are you spending so much time on Barclays?”

“What’s wrong with it? I would rather get an offer for the summer than no offer. Besides, the people are really nice.”

Time was slipping away as I forced my exhausted body to work into the night and then awaken early each morning. Suddenly, it was five days before my Super Day; thankful for a lack of Friday classes, I took a Megabus up to New York to visit Barclays and J.P. Morgan for private coffee chats and office visits. I was star-struck at my first glimpse of the finance industry behemoths — J.P.Morgan’s bronze sign was swarmed by tourists; Barclays’ blue tower loomed over pedestrians in Times Square; Bank of America’s glass skyscraper buried its spire in the clouds.

Then it was Monday; there were two days to go before my first Super Day … and I had to take my Corporate Valuation midterm, one of the hardest classes at Wharton. I hadn’t gone to class since the first midterm, and I had spent my weekend memorizing common interview questions and being mock-interviewed by my senior friends. A job was, after all, more important than a single grade. Consequently, my friends and I started studying at midnight, leaving 10.5 hours to learn two months of material and sleep before the midterm.

My head drooped onto the desk as the hours passed: 3 a.m., 4 a.m., 5 a.m. My fingers typed meaningless words onto my cheat sheet while my brain puzzled over concepts unrelated to the class and quite related to recruiting: Did I have enough business formal outfits for three days of interviewing at Barclays? Had I finished emailing all the thank-you emails from Friday’s office visit?

Then it was Wednesday, and I was on the train to New York with a hastily packed suitcase of clothes. Glancing around me, I felt a bit like a kid playing dress-up. The train was filled with adults in suits casually sprawled in their Amtrak Acela seats, while I sat huddled in mine, feeling small.

When I arrived in New York, I dropped off my suitcase and headed to the first event — a networking reception at a local bar where Barclays employees and interviewees were crammed together, shouting over the music and each other’s conversations. The smell of baked artisan pizza and skewers drifted tantalizingly around us, but of course we were forced to resist the free food because it was considered rude to eat at networking events.

“Hello everyone! Welcome, and congratulations for being accepted into the Barclays Junior Success program,” boomed a voice over the speakers. The chatter stopped and we turned to face a smiling African American man holding a microphone. “How’s everyone doing?” The crowd murmured “good” back, and the man proceeded to give an introduction to this program — a diversity initiative that invited historically underrepresented populations to interview for Barclays summer internships, preceded by two days of networking and workshops.

The rest of the evening and the next day passed quickly. I loved the spirit of the diversity program: It obviously gave me an extra opportunity to interview for internships, but more importantly it connected me with current employees from minority backgrounds. As I listened to Barbara Byrne, Vice Chairman of Banking, speak about her experiences as a female rising through the bank, the idea of being on the Barclays executive board suddenly didn’t seem so far off. If she could do it — and have kids — why couldn’t any of us? Why couldn’t I?

The final day, Friday, was the Super Day. I had a first-round phone interview with Morgan Stanley in the morning, and then sprinted to the Barclays tower for my final-round interviews. I kept telling myself the advice we’d been given yesterday: Stay calm.

And I was calm. The nerve-wracking Morgan Stanley interview gave me an odd sense of peace now, drinking in the sunlight at the top floor of the Barclays building and waiting for my three final-round interviews to begin. It was hard to feel nervous; unlike for Morgan Stanley, I had prepared extensively for Barclays, with my numerous phone calls, a visit to the office last week, and countless hours of practicing interview answers.

I was called up … and again, the interviews passed in a blur (if I hadn’t been taking notes, I wondered if I would remember anything we talked about).

The end of the program was anticlimactic. We were each given a blanket embroidered with Barclays’ logo, and then dispersed to airports and train stations to head home. Most people would hear back by the end of the day, although they told us to expect a call by the latest on Wednesday. Anxiety coiled in my stomach: The waiting game had begun …

Next on the Journey