‘Surf Club Girl’ Is Riding the Waves at Penn

Emily Grossarth, C’24, W’24, may be a beach girl but she’s no beach bum. She founded the Penn Surf Club and runs a surf school for young girls in her Jersey hometown.

Girls just wanna have fun, but Emily Grossarth wants to have fun and be a boss. The lifelong surfer turned her hobby into a business — a surf school for girls — and a student club at Penn to share her love for the sport.

Emily grew up in Rumson, a small town along the Jersey Shore. When she was five years old, her dad taught her how to surf and she “hated it,” but changed her mind a few years later after a friend invited her to a summer surf camp.

“As soon as it wasn’t my dad teaching me, I liked it,” she said, laughing.

She started surfing every day and learned to love surfing with her dad and brother. Family vacations centered around surfing trips to Fiji, Australia, California, and Hawaii.

The New Jersey native began surfing competitively at 15 after her younger brother egged her on.

“He would make fun of me and said that I was too scared to do [a competition],” Emily said. “Finally, I had to. I wanted to prove him wrong.”

The sophomore won her first competition and has been competing ever since, including at the 2019 U.S. Open of Surfing. She also had a chance to train at the Hurley Performance Center in Australia, the official training center for the Australian Olympic surf team.

“Coming to Philly, at first, was definitely pretty jarring, being away from the ocean. But I’ve definitely gotten used to it,” she said.

Emily wanted to experience big city life, after living in a town of 7,000. Arriving at Penn was exciting, the 2018 East Coast All-Star surfer said. 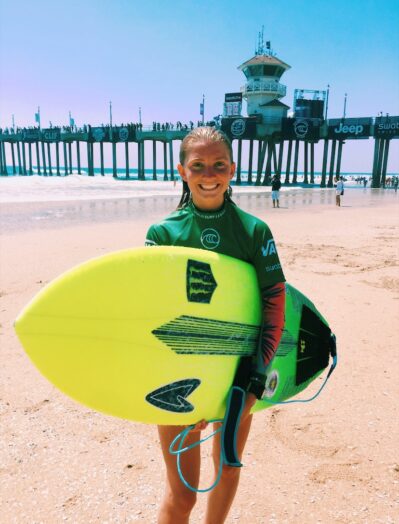 Emily is in the dual-degree Huntsman Program in International Studies and Business with a focus on Spanish and Spanish-speaking regions. Huntsman students major in international studies with a target language in the College of Arts and Sciences and major in economics at the Wharton School.

In her first year, the Huntsman student found herself interested in joining several pre-professional and academic clubs but wanted to balance those with “fun” clubs. She asked her advisor Kelly Cleary, director of the Huntsman Program, about her dilemma.

Last fall, the life-long surfer filled out a form and by the next morning, the Penn Surf Club was a new club at Penn. Fifty people have since joined.

“It’s pretty funny because I’ll walk around Locust Walk or see people out and about, and they’re like, ‘Oh my God, Surf Club girl. I want to join.’ I’m like, ‘Well, there’s a lot more to me.’”

With pandemic restrictions in place, the club couldn’t host in-person events but did create an online community. They also used this time to learn from Penn’s ski & snowboard club about the logistics of equipment transportation, as well as medical and health insurance.

The club hopes to plan trips to the Jersey Shore this coming fall, including a Penn-Princeton surf meet.

While it might seem like a cliché, Emily’s interest in business started at age eight with a lemonade stand.

“I grew up across the street from a church,” she said. “On Sundays, when it was really hot, I would sit at the end of my driveway with lemonade when church got out, and I would make so much money because there’s no air conditioning and everyone was really hot.”

That entrepreneurial spirit continued when a family friend reached out to see if Emily would give their daughter surf lessons, she said, “Okay, why not?” and, for the last five years, Emily has been running her own summer surf school.

“I’ll give surf lessons primarily to young girls in my community,” she said. “I really enjoy it, and it’s been cool to learn how to run a business and how to manage finances and hire employees and buy equipment.”

Surf competitions aren’t the only way Emily has experienced different parts of the globe.

Last summer, Emily did a virtual internship with a fintech startup in Medellin, Colombia, from her home in New Jersey through Penn’s Global Research and Internship Program (GRIP).

The internship was entirely in Spanish, and Emily was surprised to work directly with the CEO.

“That was incredibly shocking. I was able to work with him literally every single day.”

The investor relations intern was also amazed by how eager and excited everyone was about her new role at the company.

“I really enjoyed the company culture,” Emily said. “Colombians are incredibly friendly people, and they were so nice and welcoming to me.”

She learned how to raise capital and about the fintech market in Latin America, and says she is still in contact with many colleagues with whom she has developed great relationships and hopes to visit.

Her investor-relations internship also helped her develop an interest in social impact.

“I learned that a lot of fintech companies in Latin America are social impact companies, just by nature because they’re promoting financial inclusion and doing a lot of good things,” she said. “I thought it was interesting how they’re generating high financial and impact returns.”

The business major was able to see what it was like to raise capital from a firm’s perspective and was curious about what it would look like on the investor side.

“That’s been a really great experience to learn more about social impact and impact investing and also be able to work with people who’ve gone out into the workforce for five years and then come to Penn,” the sophomore said.

“WIVA showed me that there are really great ways to invest responsibly and be able to generate high financial and impact returns, which is something that’s really interesting to me.” 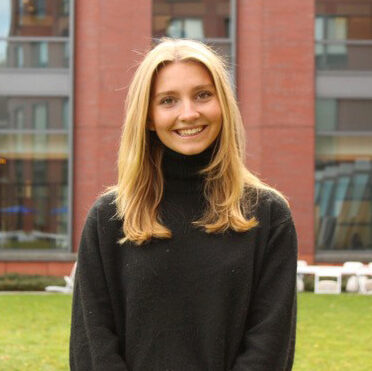 3 things you love about Philly
(1) the food, (2) the Schuylkill River trail, (3) the museums/history