Social Impact, Swimming, and Business: How This Wharton Senior Juggles Her Eclectic Passions

“When I came to college, I knew that I was incredibly lucky to have the opportunity to study here, and I always felt the responsibility to give back to others.”

Kimberly Phan, W’18, is passionate about many things: traveling, swimming, volunteering, tech, business… and poutine. At Wharton, where she studies OIDD, Business Analytics, and Finance, the Canadian native happily balances varsity swimming with three concentrations and a myriad of meaningful extracurriculars.

As one of Wharton’s competitively selected 2018 Peer Advising Fellows, Kimberly is a mentor and informal point of contact for younger undergrads.

“Juniors and seniors are some of the most valuable sources of information for underclassmen — but they might not have the opportunity to ask us questions because that connection hasn’t been established yet,” Kimberly said. “I really want to build relationships with underclassmen and be a constant resource for them throughout their time here.”

Philanthropy in the Local and Global Community

Kimberly’s desire to help others extends far beyond Penn. Early on, she made a conscious decision to be cognizant of the goings on around her — especially in the local community. “When I came to college, I knew that I was incredibly lucky to have the opportunity to study here, and I always felt the responsibility to give back to others,” she said.

That’s why she got involved with Big Brothers Big Sisters, a mentoring program in which college students spend an hour a week with elementary-school mentees in West Philly. “I had a fifth-grader to hang out with during recess,” Kimberly said. “It was just really refreshing to get off campus… and really rewarding to have some sort of impact — but honestly, I think she made more of an impact on me.”

Kimberly is also part of We Can Swim, where she hosts free swim lessons for children in West Philadelphia every week. As a member of Penn’s varsity swim team, Kimberly is an outstanding athlete, and simply couldn’t think of a reason not to get involved.

“I can’t imagine a time when I couldn’t swim because I’ve been doing it for so long, but the drowning rates in West Philadelphia are incredibly high,” she explained. “There were a lot of volunteers from the swim team because we realized that we were incredibly privileged to be swimming for a school like Penn — why not share our skills?”

Kimberly’s passion for giving back extends into her business experience. She combined her academic interests with social impact by joining Penn International Impact Consulting (PIIC) — a student consulting organization on campus that partners with NGOs in developing countries. She’s grateful because PIIC (pronounced “peak”) taught her invaluable working skills in consulting and also gave her international experience.

“My freshman summer, I went to Cambodia with a student group to work with an NGO, and in my sophomore summer I went to Peru for five weeks,” she said. “It was a good border between extracurricular and academic work.”

Even while juggling so many different passions and talents, Kimberly hasn’t had too much trouble managing her time. She credits swimming.

“You’re conditioned as an athlete growing up to be very good at time management,” she said. “I’d have practice two times a day, and I’d have to work around them. In that sense, my day was more structured — I had to get on a schedule, and I had to study hard between classes and practices.”

Kimberly also believes strongly in asking for help and knowing when you need it. “Everybody has a tipping point where they need to lean on others for support. You need to be really honest with yourself about everything, and you need to be very communicative. That allowed me to do everything I was doing,” she explained.

“It’s very much about maturity and responsibility. People here want to see you succeed, and as long as you’re upfront about it, most are willing to work with your schedule and listen to your feelings.”

But she maintains that she isn’t any different from her peers. “I think everyone is doing a lot at this school — it’s just the nature of Penn,” Kimberly said. ‘I don’t think I’m unique per se, because everyone’s pretty impressive.” 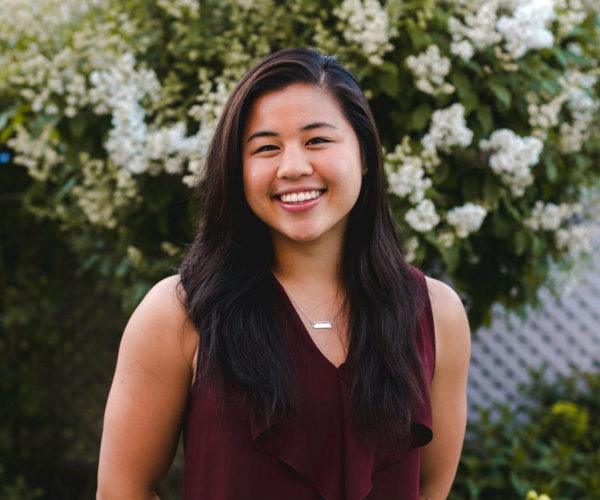 A day in the life of Kimberly