Wharton Stories » Three Takeaways on the Economics of Race in America

Three Takeaways on the Economics of Race in America

Prof. Kerwin Charles from the University of Chicago joined Dean Geoffrey Garrett for a candid discussion about The Economics of Race in America, a Tarnopol Dean’s Lecture.

With his research on racial and gender discrimination in labor markets, Prof. Kerwin Charles from the University of Chicago Harris School of Public Policy brought a wealth of knowledge to Wharton for a wide-ranging discussion about race in America through an economic lens.

The topic, which has been of broad interest on Wharton’s campus and society at large, took place on October 18, 2017 as part of Wharton’s Tarnopol Dean’s Lecture series, hosted and moderated by Wharton Dean Geoffrey Garrett.

“We have an opportunity to do things at the School which we think are of great importance, not only internally but externally as well in the world. And that’s certainly true today,” said Dean Garrett.

Here are three takeaways from the discussion, which actively engaged both the speakers and the audience.

1. The economic disparity across races is persistent

Charles began his lecture by highlighting racial differences in wages and employment, zooming in on the contrast between African Americans and White Americans. This was exacerbated by the “growth in zeroes.” By this, he referred to the growing unemployment— zero wage — in African American men and attributed this partly to the increase in incarceration since the 1950’s.

“Not only is the level high and troublingly growing but you will notice that incarceration represents a hugely important phenomenon amongst blacks relative to whites. That is something that was not true before.”

Apart from relying on just the mean and median, Charles also used the 90th percentile of figures from various income distributions to derive new insights. He was able to show that inequalities are greater further down the income distribution for African Americans and White Americans. 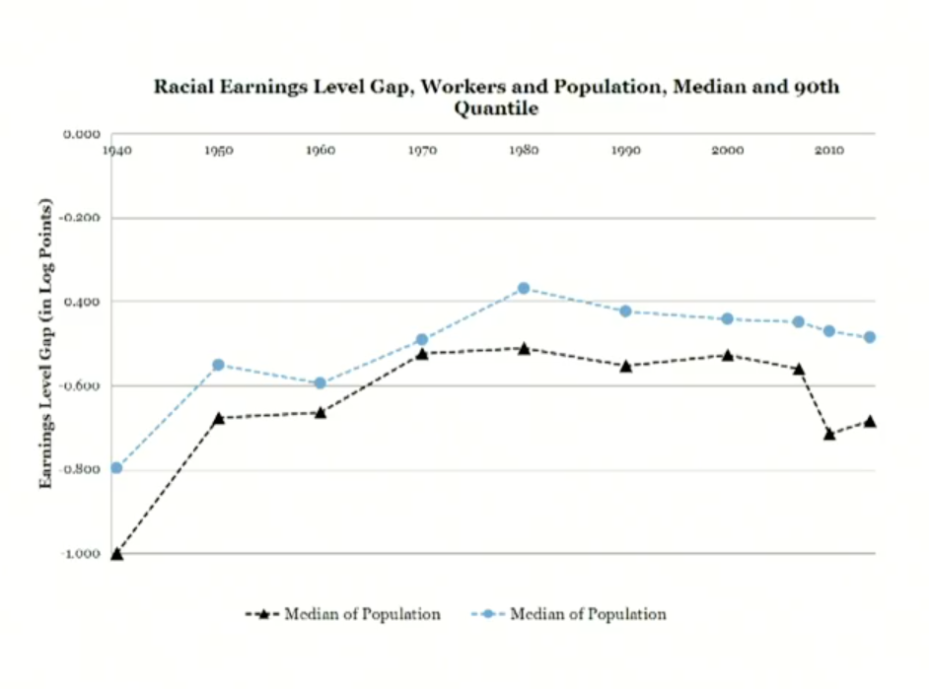 “The earnings of the median African American man compared to his white counterpart is as bad as it was in 1950,” he said. In contrast, “the 90th percentile black person has made real gains.”

“Whites can transition out of the bottom 40th percentile in two ways. Their own earnings can thrust them into the highest tier, and they can marry out,” Charles said, explaining that blacks usually marry partners in similar economic situations and thus have less social mobility. He continued, “So if you’re in the bottom rung, the bottom 25 percent of Americans, there’s this inter-generational thing that your kids are going to be there too.”

In the concluding remarks for his lecture segment, Charles explained that less work has been done on the contrasts among other races due to the lack of data available. “It turns out that the nation has obsessively measured blacks with the very first census,” he said. On the other hand, “I don’t know how many Asians there were in North Carolina in 1870.”

Still, he acknowledged the need for more work in other races and countries. “We have to do more of that than we now do. America isn’t the only place.”

2. The path ahead must include more work by universities

During the discussion, Garrett asked Charles for his opinion on the Supreme Court case of admission bias against Asian Americans to Harvard University and its ramifications on affirmative action.

While recognizing the merit of the plaintiff’s argument, Charles hedged his response on the goal of the university. “To the extent that you believe entry should be determined in some skill-determined way, First Past the Post talent, that modification of that kind of rule necessarily means something like discrimination.” “First Past the Post” is a model that uses quantitative admissions metrics to determine who’s in and who’s out — everyone who exceeds a specific score gets in, without regard to other factors or achievements.

“It’s not obvious to me — I’m not saying that it’s wrong— that the objective function of great universities today, in the world as it now is, should be the admission of First Past the Post,” he said. “If a university has its aspiration to train leaders drawn heterogeneously from a future society, then the First Past the Post metric won’t exactly be right.”

Garrett then steered the discussion toward diversity in faculty recruitment and cited the obstacle of cost and convenience in recruiting faculty beyond a select pool of schools. Even though Garrett felt Wharton had had “an extraordinarily successful year in diversifying the faculty,” he asked Charles for his recommendations.

Charles confirmed the challenge that Garrett faced. “When I did faculty recruiting as the interim dean and then as the deputy dean of faculty, I was struck by the narrowness of the schools examined. There is no panacea.”

Even as Charles claimed as such, he recommended a “scattershot approach.” One would involve targeting recruitment at new fields that have greater minority representation, such as women in Family Economics. This would lead to expansion in “not just school but field.” He also proposed the funding of post-doctoral fellowships for “marginal” candidates.

3. There’s an unequal burden in being a role model

Charles paused and reflected for a while before answering. “I am aware of my relative rarity in this thing,” he said. “And so I am conscious about a kind of group obligation.”

“It doesn’t mean that I’m more attentive to my black PhD students than I would be to a white woman whom I’m advising,” he said. “That’s not what I mean. What it means is that if I can — here or there — I will offer encouraging words or share stories. I will not lie and tell you that I don’t. I very much do and I’m aware of it. That’s a kind of direct investment I would make. It’s not a huge one but it’s a real one.”

Charles then elaborated on how his success and subsequent actions could be a burden. “I can be hyper-sensitive to how a slip of mine, a failure to achieve something, a screwing up could affect somebody behind me,” he said. “And to carry that burden as an assistant professor or a graduate student is just a terrible thing.”

Still, Charles claimed that the burden would be easier to shoulder with time and encouraged minority figures, be it in race or gender, to keep striving and inspiring those following in their leads.

“I’d like to assure them that the thing fades over time,” he said. “That in the middle of the burden, there’s this thing down the line that will have big payoffs for other people that you don’t even know well.” 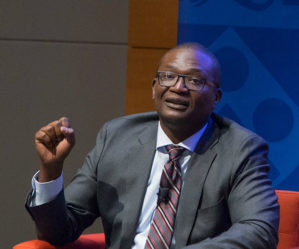 The speaker series honors alumnus, Michael L. Tarnopol, W’58, a global business leader who was Vice Chairman of the International Banking Division of Bear, Stearns & Co. He earned the Distinguished Service Award from the Wharton Alumni Association in 1997 and the Dean’s Medal in 2003 for his contributions to Wharton.

Past lectures in the series include the impact of Trump’s administration on the U.S. economy and the sharing of a global business leader’s life lessons.