When I applied to Wharton, I was concerned that my background in the Navy and DHL might not be a good fit. I was very wrong

EMBA student veteran and Naval Academy graduate Jeffrey Mund has been busy networking with his new classmates at Wharton.

In addition to his role as manager of Maryland, Delaware and BWI Airport for Deutsche Post DHL, he has connected fellow veterans and active duty military students on the Philadelphia and San Francisco campuses and has built synergies among his classmates, Wharton, and DHL.

We asked Jeff to tell us more about what brought him to Wharton and his experiences at school so far. Here’s what he said:

I used to consider myself a Naval Academy guy who joined Deutsche Post DHL, but as I am learning in the Wharton EMBA program, at this point in my career I am more of a DHL guy who used to be in the Navy.  I learned to lead in the post 9/11 U.S. Navy, and I learned to manage during DHL’s strategic cutbacks during the Great Recession.

While serving in the Navy, I worked in aviation operations both on active duty and in the reserves. After joining DHL, I was challenged to lead during the company’s 2009 U.S. restructuring. After two years at Wharton, my long-term goal is to lead DHL USA as a C-level manager, and my short-term goal is to become an international country manager.

I was particularly excited that 40 percent of the student body at Wharton is international and that the School has 95,000 worldwide alumni. Since DHL is known as the “International Specialists “ and has a presence in over 220 countries and territories, Wharton’s worldwide network is a great complement to DHL’s international presence.

On the Veteran Community

When I applied to Wharton, I was concerned that my background in the Navy and DHL might not be a good fit. I was very wrong. Wharton has encouraged me to draw from both my Navy and DHL experiences, using both as a lever to foster connectedness across our group. My Navy experience served as a way to connect with my classmates immediately; we have several military members on both coasts currently in the program. 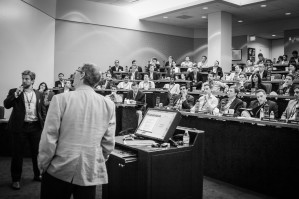 In September, our peers from the San Francisco campus came to Philadelphia for a class weekend. Having everyone together on one campus was awesome. We organized a gathering for students in all branches of service and veterans.

We talked about our different perspectives and what we brought to the table at Wharton. We also discussed what we had in common and how we could encourage more veterans to come to Wharton’s EMBA program. Although there is a Veterans’ Club in the full-time MBA program, we decided to form our own EMBA Veterans’ Club. That is now in the works and will officially launch soon.

In addition to the club, we also decided to do more to engage our alma maters with Wharton. We discussed how we can serve as guest speakers at our alma maters’ events on topics like business development, leadership and economics, and talk to students about Wharton’s programs. We have our first joint ethics event with Wharton and the U.S. Naval Academy planned for 2015. We want to build upon the relationship that exists between the service academies and Wharton.

My DHL experience has also been welcomed, and has allowed for some interesting ways to connect my classmates, Wharton, and DHL. In our first Strategy course, my study group chose DHL as the focus of a team project. We ended up studying the company’s strategy, human social capital, and globalization efforts.

The project was well received by DHL, which invited my team to the company’s global air hub in Cincinnati, OH. In addition to obtaining the backdrop for our paper, our team made that trip into a family event in Cincinnati over Labor Day weekend. Recognizing the value of the Wharton brand, I also was selected by DHL to participate in our Advanced Mentorship Program.

I’ve only been at Wharton for a few months, but these have been amazing experiences! 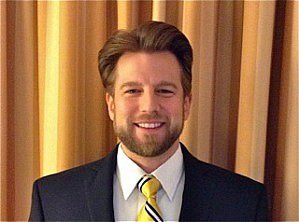 Before Wharton
Military Officer in the US Navy