When Michelle Mighdoll, W’08, WG’18, was asked to open up a West Coast operation for the Lieber Institute for Brain Development, she gained knowledge and network through the EMBA program at Wharton San Francisco.

The research part of Michelle Mighdoll’s job is unique. She collects and dissects human brains to study gene expression. But that’s only part of what she does.

After graduating from Wharton’s undergraduate program with a dual concentration in health care management and legal studies, Michelle  entered the field of medical research. She became employee number seven at a unique startup, the Lieber Institute for Brain Development at Johns Hopkins. Over the years, she has held several titles, but her work at Lieber remains focused on two main areas: business development and the research of human brains.

Currently the director of West Coast Operations in San Francisco, Michelle works to increase awareness of the Institute on the West Coast to increase funding and collaborations. “We have mapped several genes in the human brain and their expression across the lifespan as well as variants for those genes by race, gender, and certain disorders,” explained Michelle. “This is a valuable asset, but it takes a huge hosting capability so we are working with some companies on the West Coast.”

Going back to school was always part of her plan. “Working in the scientific research world, I didn’t want a wall in front of me because I didn’t have an advanced degree,” said Michelle.

Initially, she thought about medical school or a PhD. However, she decided to pursue an MBA for two reasons. First, she fell in love with the business development side of her work. Second, she learned about Wharton’s MBA Program for Executives.

After attending an alumni event at Wharton San Francisco with her dad, who also graduated from Wharton, she returned to her home in Baltimore and attended an EMBA admissions reception to talk to staff and meet current students. “When I heard about the curriculum, the network, and the environment, I thought that this program was exactly what I needed to do next,” she said.

As for self-sponsorship, she saw it as a “no brainer” – and as a brain researcher, she’s an expert. Michelle explained, “I knew there would be sacrifices in terms of money and time, but I saw this as an investment in my future so I was OK with that.”

Moving to the West Coast

Wharton’s San Francisco campus made the EMBA program even more attractive for Michelle, who had already spent four years on the Philadelphia campus and was living in Baltimore. She explained, “My employer had been considering the launch of a West Coast branch of the Lieber Institute and I saw this as an opportunity to make a change and move to San Francisco to lead that new office.”

She said, “The San Francisco campus is in a great location in the city. It’s smaller than the Philadelphia campus, but this gives us tremendous access to the faculty who stay at the same hotel and eat meals with students. We also have amazing speakers because of Wharton’s large West Coast network.”

Another benefit of the West Coast program, noted Michelle, is her classmates. “I would have been lost moving to San Francisco without this program. My classmates have helped me both personally and professionally with this transition. They have helped me make business connections to the pharmaceutical and healthcare industries in the region, and many have become lifelong friends.”

“We really enjoy spending time together and have done several group trips to places like Tahoe, Las Vegas, and wine country. I recently attended a Global Modular Course in London with some classmates, and both the social and academic opportunities were fantastic.”

She pointed out that women students at Wharton San Francisco provide a unique support network too. “In addition to the Women of Wharton club, we have our own chat network that recently launched an initiative to encourage each other to brag about anything positive. Women don’t always give enough self-praise and we are trying to actively encourage each other to share good news.”

Michelle, a professional triathlete, also enjoys running with her classmates on school weekends. “I’m taking a break from professional racing now because of school, but I join classmates for morning runs and a boot camp. I’ve been able to share my love of fitness with them, and I’m benefiting from their encouragement to try new activities.”

As for the first-year core classes, Michelle said that a highlight has been Management. “I have a more holistic view of my organization now and see that certain dynamics are common to teams in every industry. Being able to recognize those patterns has been very helpful. I’m looking forward to taking electives in my second year and am planning to do an independent study in health care and data analytics.” 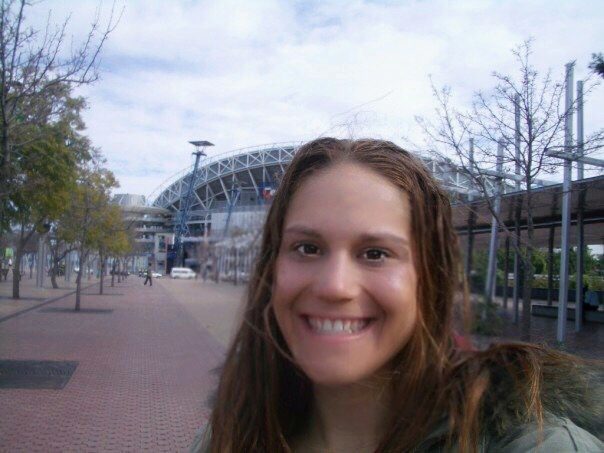