Wharton Stories » Growing Hockey in China from the Ground Up

Growing Hockey in China from the Ground Up

NHL media strategist Louis Gilbert, G’19, WG’19, is developing a local fanbase for hockey in China, where the sport is growing in popularity.

Louis Gilbert, G’19, WG’19, was fascinated by the 2008 Beijing Olympics when he saw the opening ceremony as a high school senior.

“I started reading about China in the news,” Louis recalled. “I showed up at Yale freshman year, and part of the curriculum was a language requirement. I thought, why not Chinese?”

Fast forward and Louis is now a Senior Manager of Media Strategy at the National Hockey League (NHL). His current project: growing Chinese interest in hockey.

“There’s a lot of analysis, thought, strategy, and negotiation that goes into sports media rights and distribution, and that’s the focus of the team that I’m on at the NHL,” Louis said. “China is committed to developing hockey and expects to expand its participation in all winter sports by 2022. We’d love to make use of this momentum to grow the global audience for hockey.”

As a graduate of the Lauder Institute’s MBA/MA International Studies program, Louis credits his Lauder thesis project — known as the Global Knowledge Lab (GKL) — for his current role.

While Louis is a long-time sports fan and conducted research in China as an undergrad, he didn’t put those interests together until he started working on his GKL.

“Something that had always been on the back of my mind from the time I had spent in China is why basketball is so unbelievably popular there, while a sport like baseball is not,” he said. “Baseball is huge in Japan, Korea, and Taiwan, and yet historically it hasn’t had much of a following in mainland China. That was the start of the research question.”

He teamed up with two classmates — one a Japanese native in Lauder’s Global program and the other a Japanese-American specializing in Japanese — along with advisors Prof. Ron Granieri and sports consultant Mireia Lizandra. They reached out to a G’15, WG’15 alumnus working at Major League Baseball (MLB). Within two hours, the alum put them in touch with the head of MLB’s Asia-Pacific Operations.

During the call, they learned that baseball has an extensive history in China, but lost its popularity after the sport was banned during the Cultural Revolution. MLB asked if Louis’ team would be interested in expanding their research to India, where baseball wasn’t really being played or watched much on TV. It was an opportunity to see whether growing the sport in a new market would be worth the investment.

Their research and consulting work eventually contributed to a new MLB office opening in India. The completed GKL was also a runner-up for the Reginald H. Jones Research Prize, awarded to the best theses in the Lauder program.

“Through doing this project, I met a ton of people in the sports industry,” said Louis. “That really jump-started my recruiting process. I had ongoing conversations with MLB, and I met a number of people at the NBA as well. I was able to have these conversations despite not having a professional background in sports or international strategy. Fortunately, the timing ultimately worked out perfectly for my current role at the NHL.”

Engaging Fans During the Pandemic

When the NHL 2019-20 season paused due to COVID-19, grassroots development efforts in China were put on hold. Louis shifted focus to help with the NHL’s media strategy for the season resumption. Keeping Chinese fans engaged on social media became a big part of his role.

“We introduced a lot of social media initiatives featuring more China-focused content, such as showcasing local hockey stories, having Chinese fans send in pictures of their NHL merchandise collections, and creating a weekly cartoon series showing hockey in everyday life,” he said. “We saw incredible results.”

With the NHL season resuming in August and the Stanley Cup Playoffs around the corner, Louis says he’s excited for what’s to come.

Some current projects include the first-ever weekly NHL Chinese-language talk show, an animated educational series about the NHL, and a new initiative called “NHL Fan Leaders” that will be recruiting diehard NHL fans across China to be ambassadors for the League.

“We’ve been developing these initiatives for months, and it’s great to finally be introducing them to our fans in China,” said Louis, who’s now responsible for overseeing the NHL’s social media efforts there. “I’ve even gotten to conduct interviews of ‘Fan Leaders’ candidates in Chinese, which has been a great opportunity to use my Lauder language skills and get to meet our most passionate fans in China.” 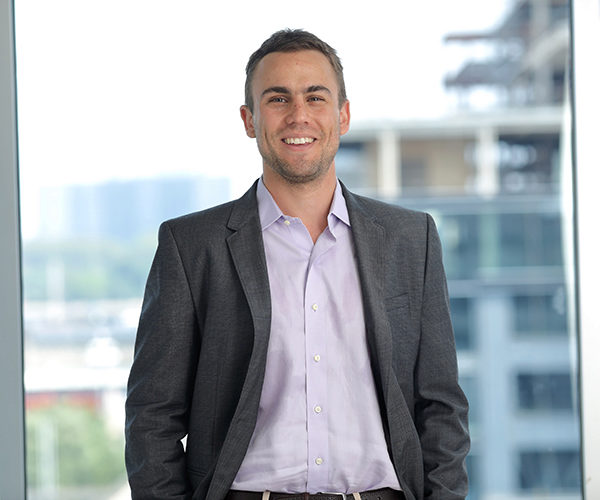 Growing into the Lauder Community

When Louis first arrived at Lauder, he wasn’t sure he fit in with his peers. “My classmates were people who had lived in seven countries or spoke six languages. One had worked five years in Beijing and I thought: ‘Wow, this person had a real international career.’”

Then he went on a regional summer immersion with his Lauder classmates before MBA Pre-Term.

“We spent two months in Asia, and socially that was an unbelievable experience,” he said. “Some of my closest friends in Lauder came out of those two months and have remained my closest friends. Over that summer, I realized that I did fit in, that no one was questioning if I had enough international experience or not.”