Why this Student Sees the Wharton MBA as a Family Investment

Originally from Brazil, Vinicius Pires, WG’19, says his Wharton education will continue to pay off for the rest of his career.

Vinicius (Vinny) Pires, WG’19, and his wife Mirela, consider the Wharton MBA Program for Executives as more than Vinny’s personal commitment. It’s a goal for the entire family. “My wife 100 percent supports me in this program because it is an investment not just for our generation, but also an opportunity to show my two children that they can achieve their goals in life, and they should dream big. I want to be a role model for my family and show them that with dedication and perseverance you can make your dreams come true.”

Growing up in Brazil, going to Wharton’s EMBA Program wasn’t part of the initial plan for Vinny. At the time, college wasn’t even a certainty. After Vinny’s father died when he was 8, his mother worked hard to take care of the family with limited financial resources. While she pushed education, he wasn’t sure that his public school background would allow him to enter one of the competitive public universities in Brazil.

“I needed to take a preparation course to have a more competitive admissions test score, but that was expensive for my family. So, I worked at the preparation school at night for one year with no salary to attend the program during the day for free. During that time, I put a lot of energy into studying because I knew this would be my chance to have a better career. When I was accepted into the engineering school at the one of the most prestigious universities in Brazil, I was extremely happy.”

Graduating in 2000 as one of the top students in his class, Vinny began his career at a large steel company in Brazil as an associate engineer and soon was promoted to technical advisor. Later, he worked in sales and marketing, assuming different leadership positions in Brazil before taking on the role of North America market intelligence manager in the U.S.

Although he had earned an MBA in Brazil, Vinny began looking into European and U.S. MBA programs. “I realized that to build my international career, I would need more global knowledge,” he explained.

“I chose Wharton because I had done an executive education program here on pricing strategies and loved it,” he said. “I look at my hard skills as a triangle: technical, commercial, and financial. Having a technical and commercial background, I saw how Wharton could fill in my global knowledge gap in finance, but also provide a strong core of knowledge for all business areas such as marketing and management.”

After he was accepted to the EMBA program, he financed his house to pay for tuition. “One of my core principles is a belief in the importance of continuous education. Regardless of where you are in your career, there is always an opportunity to learn new things. An MBA at a top business school like Wharton would help me prepare for the next stage of my career.”

After a few months in the program, Vinny was contacted by a global company, CoorsTek, based in Golden, CO. “After spending 17 years with my prior company, I thought this was a good opportunity to expand my experience in a different industry,” he said.

“The company is always looking to improve its processes to maintain its leadership position, and Wharton is helping me to contribute to my organization,” he said, noting that his boss is very supportive of this program. “I can leverage all the knowledge, tools, and analytical skills from Wharton in my day-to-day activities as director of strategic insights. My company is extremely open to new ideas and gives me the opportunity to apply everything I am learning at Wharton, which is awesome.”

As for the commute to Wharton, the School’s two campuses offered the flexibility he needed. In his first year, he commuted to the Philadelphia campus from Tampa, FL. For his second year, he transferred to the San Francisco campus to shorten the commute from his new home in Colorado.

“This has been an incredible journey so far,” he said. “I’m working for a global company and I have connections from the Wharton network across two campuses and across the globe. This has been a worthwhile investment that will continue paying off for the rest of my career and for future generations of my family.” 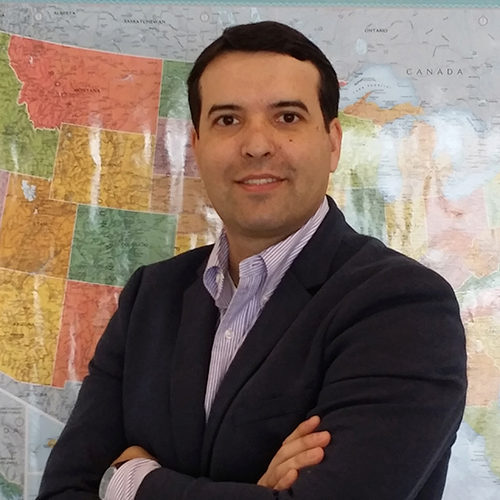