How Wharton Dance Studio Helped This MBA Grow as a Manager

Karan Dhruve, WG’18, came to Wharton for leadership experience to further his career in consulting. Wharton Dance Studio is one of the ways he gained it.

As co-president of Wharton Dance Studio, Karan Dhruve is learning to lead on stage and off. He’s planning to take the skills he gained choreographing and producing one of Wharton’s biggest performances and incorporate them into his career at Bain & Company.

Karan runs a board of his peers, choreographs dances, and puts on a large-scale production of about 400 dancers featuring 14 dance forms. The dancers vary in level of experience, and all styles of dance are welcome, including jazz, modern, salsa, cha-cha, bhangra, tap, hip-hop, swing, tango, bellydance, and more. To Karan, there is no better feeling than when the whole show comes together.

“I love the feeling when everyone is happy onstage, dancing together and performing,” he said.

The premise of Wharton Dance Studio is that anyone can dance, even if they don’t have any dancing experience. In his work as a choreographer, Karan has learned how to keep dancers motivated and the energy high.

“I want to make sure the team I am running is getting the tasks done and communicating with each other, while also having fun,” he said. “That’s the kind of manager I want to be — making sure people are happy, motivated, productive, and learning.”

Where Karan’s Passions Came From

If you trace back Karan’s business and dance interests, they’ve intersected at Wharton before. Karan first came to Wharton as an undergrad, where his most vivid experiences were four years dancing for Penn Masti, a South Asia fusion dance team. Being part of Penn Masti enabled Karan to discover his passion for dance.

Coming from Mumbai, India, Karan felt Penn Masti eased his transition and provided him with a community, giving him a sense of place and purpose. Penn’s dance community was integral to Karan’s college experience, and a key component of why he loved undergrad.

Karan says returning to Wharton for his MBA was an “easy choice.” He was attracted to the flexibility of Wharton’s curriculum, the high percentage of international students, and the student life involvement. The key skills he wished to acquire were leadership development and risk-taking. So, after working in management consulting at Bain & Company in New York, he decided to exchange his briefcases for books and return to Wharton.

In addition to the academics, he knew he’d return to dance at Wharton.

“Coming back to Wharton it was on my mind because when you’re working, you’re not really able to pursue those passions,” he said. “I wanted to get back into it. I was a choreographer and a board member in my first year, and I just loved the whole experience.”

This time around, Karan’s experience of Wharton is different. What surprised Karan most about returning to Wharton was the degree to which his most formative and memorable social experiences take place off-campus.

“You’re only on-campus for your classes and some of your meetings,” he explained. “In Center City, that’s where a lot of meaningful experiences happen.”

Another key difference in Karan’s MBA experience is the value placed on leadership development. Karan’s other extracurricular involvements have been crucial to his Wharton MBA experience and overall growth as a person.

Karan applies the leadership skills he has learned as a choreographer to his work as a William P. Lauder Wharton Leadership Fellow. The position entails mentoring first-year MBAs in an intensive 15-month leadership development and coaching role. Through his work with Wharton Dance Studio, Karan has learned about coaching people and “how to help people figure out the best answers for themselves by asking the right questions.”

Karan’s plans to return to the consulting field when he graduates, now with knowledge and experience to guide him throughout his career. He’s ready to lead.

“Dance Studio has given me a lot of that,” Karan said. “In the moment of rehearsing, you’re not really thinking about leadership. But when someone asks you to tell them about a leadership experience in an interview, being a choreographer for Dance Studio comes to mind.” 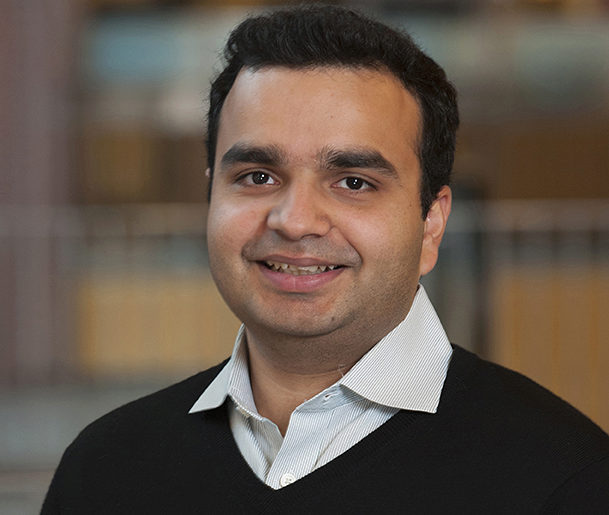 On March 29 Wharton International Dance Show assembled more than 400 performers on one stage, featured 14 dance forms and 26 choreographers in a three-hour dancing extravaganza at the Annenberg Center Live.