Not only did I learn how to run a business, I also gained a supportive network, the confidence to make this leap, and the person to do it with.

When Michael Madon, WG’14, and Tim Jackson, WG’14, came to Wharton’s EMBA program in Philadelphia, they didn’t know each other much less plan to start a business together. But two years after graduation, they launched Ataata, a security awareness platform.

Having recently completed a round of fundraising, including an investment from their former classmates, we asked Michael and Tim to tell us more about their entrepreneurial journey and the impact that Wharton is making on their careers. 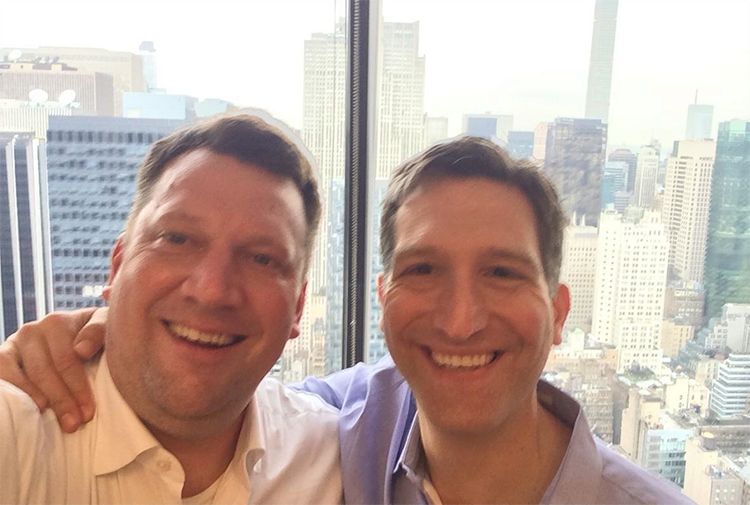 Michael: Before Wharton, I was an executive in the Treasury Department where I helped develop strategies to identify and mitigate cyber risks and vulnerabilities in both the department and the financial sector. This was at the beginning of one of the worst onslaughts of cyber attacks against banks and financial institutions in recent memory. I saw that the solutions to many of these seemingly intractable problems rest not with government, but rather with the ingenuity of the private sector.

I had founded and ran organizations large and small in the Army and Treasury, yet I knew enough to know that while some skills overlapped, success in the private sector required a different set of tools. So, I decided to get an MBA to learn the core fundamentals of business while serving at Treasury. And I decided on Wharton, as it is the best school in the world that offers a full MBA formatted for working executives.

Tim: I was working in Philadelphia at an alternative energy windmill company, overseeing the accounting and finance functions. I realized that I risked being pigeonholed in those areas for the rest of my career. To do something broader, I needed an MBA.

As I looked at schools, I saw there is a major difference between top-tier EMBA programs and second-tier schools. When I met with students at Wharton, I knew this would be a great fit. If I was serious about getting a breadth of knowledge in different business areas, I would be hard pressed to find a better program.

Tim: I was open to the idea of launching a business when I came to Wharton. Previously, I had my own accounting practice as well as experience with an internet startup. While I didn’t take entrepreneurship classes, all of my Wharton classes are unbelievably helpful today as we build the business. For example, we recently put together an investors’ pitch deck. There are many ways to do that, but I thought back to marketing class where we learned about marketing plans and strategies for going to market. I can always go back to those fundamentals.

Michael: The last thing I thought I’d be doing when I came to Wharton was starting my own business. However, the classes provided a foundational business knowledge that I’m using every day. There is no way I would have had the confidence to start a business without that knowledge.

Tim: Michael took a job in the private sector after graduation and was hearing feedback from security officers that they needed more people to be aware of what is happening with cybersecurity. One thing that kept coming to mind from marketing classes at Wharton was that you shouldn’t sell what you make, but rather make what you can sell.

The market was saying that this is what we want to buy. Eventually, we realized that this is what we should be selling and we could form a business around it. We started putting a structure and rigor around the key points of the idea. In January 2016, we decided to make it official. We left our jobs and have been working on Ataata ever since.

Ataata is the next generation security awareness platform for today’s workforce. It gives employees a reason to care about security and reduces risks and costs associated with security breaches that come from human error. We’ve assembled a tremendous team and an incredibly supportive board of directors and advisors. We are looking forward to taking the industry by storm this fall.

Michael: I think three core requirements for a successful partnership are trust, complementary skills, and grit. Those qualities are all borne out in the two years of Wharton’s rigorous program. Tim and I had become good friends at Wharton — and he always struck me as someone who had those three qualities in spades. So when I was thinking about a potential business partner, I didn’t really have to think very hard, or look very far. I couldn’t think of doing this with anyone else.

Tapping into the Network

Michael: Our Wharton class is very close. Before graduation, our class formed an investment club. That club is now investing in our business. That sends an incredibly strong signal of support and belief in our ability to succeed. It’s the highest vote of confidence we could possibly get and reflects the strong community at Wharton. The broader Wharton network is also a force multiplier and I often chat and meet with alumni to discuss potential opportunities.

The Value of a Wharton MBA

Tim: I wouldn’t be where I am today without having gone to Wharton because I never would have met Michael. An important part of business school is the people you meet and experiences you share. My classmates were extraordinary. Everyone was impressive and even now, two years after graduation, we still help each other in any ways that we can.

Michael: The proof of what Tim says is that he and I are building this business and that our classmates are investing in us because they believe in us and our idea. Without a doubt, I wouldn’t be doing this without having gone to Wharton. Not only did I learn how to run a business, I also gained a supportive network, the confidence to make this leap, and the person to do it with.