MBA Students Speak out on Challenges for Asians in America

“Today’s event will focus on Asians and Asian Americans … but you can extrapolate the theme of exclusion to any demographic.”

MBA students leaned against walls and sat on stairs in an overflowing Huntsman Hall classroom on November 10 to take part in “The ‘Model Minority’ Speaks Out: A Conversation on Asians in America.”

Co-organizer James Gong, WG’17, of the GCC said, “We’ve been preparing for this for a month, and we’re happy it’s happening now. It’s not only about Professor Linneman’s remarks, but also about how we are treating each other in this community. I didn’t grow up here, and one thing I find fascinating in this country is that we have different backgrounds but can come together to talk about it. Through this communication we are able to learn about and better understand each other.”

“We have the opportunity to have conversations across differences here,” he said. “We are fortunate to have these international events this week. Many of us in the United States feel threatened by difference instead of feeling enriched by it … We are committed to keeping this a place of open expression for everyone.”

Elizabeth Tang, WG’17, co-president of Return on Equality and co-organizer, said, “Today’s event will focus on Asians and Asian Americans, because we’re responding to a recent incident of discrimination against the Chinese community. But you can extrapolate the theme of exclusion to any demographic — in the history of the United States, almost every ethnic group you can think of has been labeled as less human and less deserving of citizenship and equal rights.”

Elizabeth discussed the history of Asian immigration in the United States and traced the Model Minority Myth — that Asian Americans and Pacific Islanders (AAPIs, for short in her speech) are hardworking, obedient, and good at science, technology and math — to U.S. immigration policies that favored the most educated and skilled immigrants

Elizabeth asserted that the myth damages AAPIs when it’s turned against them as “proof” that there is no discrimination and that they don’t need any help. AAPIs in the United States are a diverse group including many ethnicities, as well as an estimated 1.3 million undocumented immigrants and many Asian Americans who live in poverty.

She also described how the myth is used against members of other minority groups when they struggle as an example of what they should be able to do.

”AAPIs are not monolithically ‘living the American Dream’ and we should not be used as a tool to attack affirmative action, which is an important remedy for both historical and current inequities that persist this country,” she said. “We need to understand that our ‘model minority’ status — our honorary whiteness — is conditional, as the recent hate crimes against AAPIs has shown us. We need to start seeing ourselves as people of color, and we need to stand in solidarity with other communities of color to help attain equality for all of us.”

Bin Xie, WG’18, one of the story tellers who followed, said, “Even if you don’t feel the pressures, there other people who look like you who do. I’ve encountered problems as a 10-year-old, at 18, and as a 20-something.”

Nick Kim, WG’18, described growing up with many white friends at ethnically-diverse Santa Monica High School. “My Korean heritage was used to deride me when it was convenient, yet any positive social status was ascribed to me being ‘basically white,’” he said.

Cindy Dexin Liu, WG’18, who first came to the U.S. from China for her undergraduate studies, said she lost part of herself when she came to the United States — the part who was a good communicator and always had the right words to say.

“The language barrier still covered up my insights,” she said. “I never knew it would be so difficult for me to be a fun person to be with.”

Cindy said she found herself on the edge of depression after trying repeatedly to join the majority culture.

“I knew I was not ready to do this anymore,” she said. “Eventually, I fell back to my comfort zone and let myself become active in the Chinese community more and more.”

As part of the International Week discussion, Cindy made an impassioned call for Wharton students to take just two seconds — for herself to allow “two seconds to be as poised in English as my Chinese self is,” and for others to grant “two seconds of patience from the majority” to wait and understand each other.

Before the event we spoke with a few student organizers about why having this conversation at Wharton is important to them as future business and community leaders. Here’s what they said. 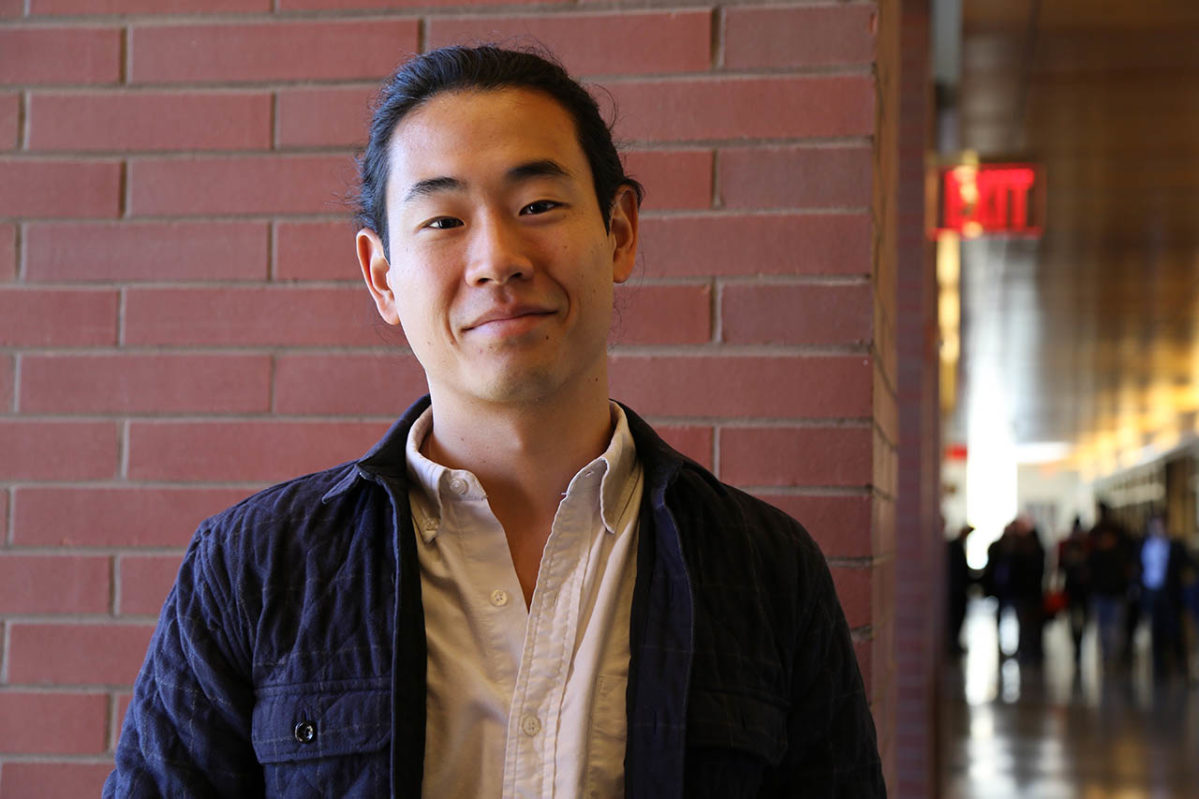 “Research shows diversity is good for the bottom line, so even if that’s primarily what motivates you, diversity matters. But I believe businesses can earn profits while making the world a better place where more people can succeed. Since Wharton is shaping the future business leaders of the world, it was important for me to share my perspective of the Korean American experience.”

Nick Kim, WG’18, who grew up in California, was most recently a general manager at Warby Parker in New York City. 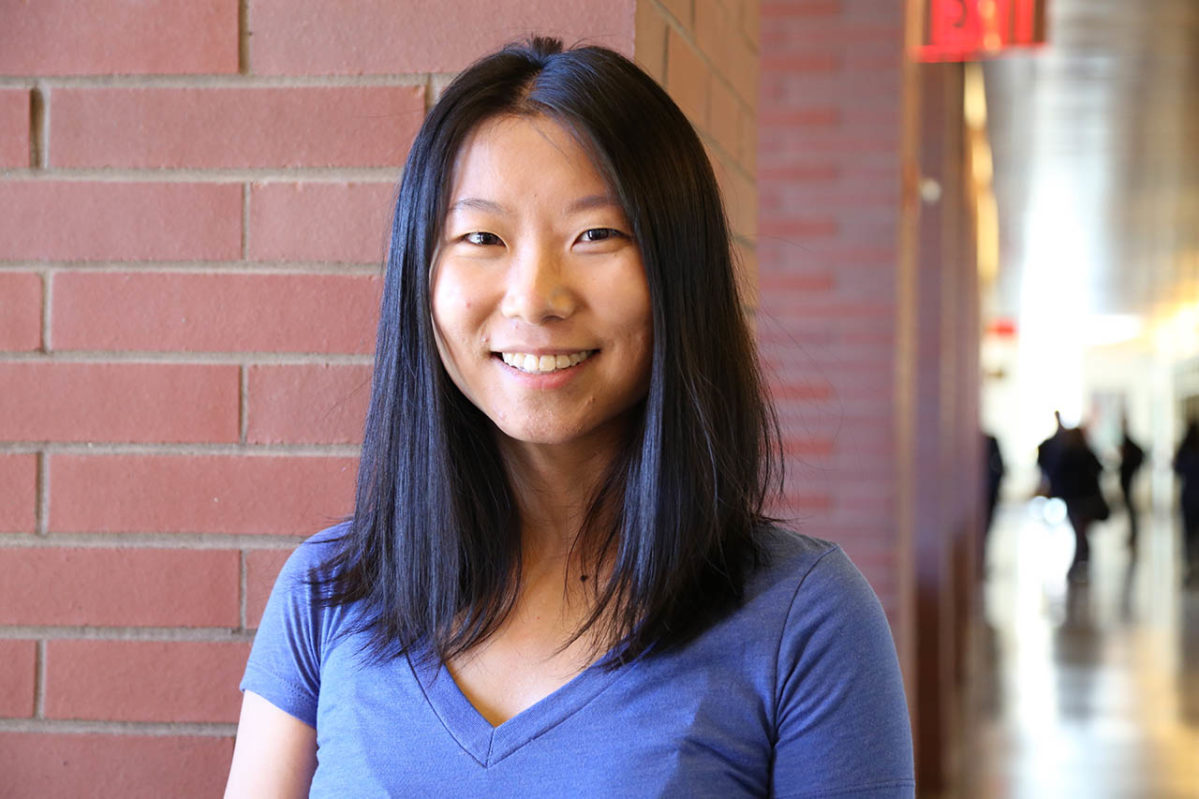 “I spent the first 10 years of my life in China and moved to the United States when I was 10, so I identify as a Third Culture kid who serves as a bridge between two cultures. As I spent more time in the U.S., I came to realize that no one fit into a cookie-cutter definition of their demographic, and that it’s especially important to be empathetic without looking at others with shaded lenses. For example, just because I’m an Asian American woman, doesn’t mean that I should be great at science. I’m not — I much prefer history!

“Building community between people from different cultures requires us to engage in conversations. It’s important to start the conversation by sharing our personal stories. When we share our stories, we are not sharing theories, but our humanity. There’s always some commonality we can draw from our stories, and that is why I’m committed to sharing stories with others.”

Bin Xie, WG’18, is a dual-degree MBA-MPA candidate at Wharton and Harvard Kennedy School. She grew up in Wuhan, China and Fairfax, VA. Prior to Wharton, she worked for a global investment bank in New York City. 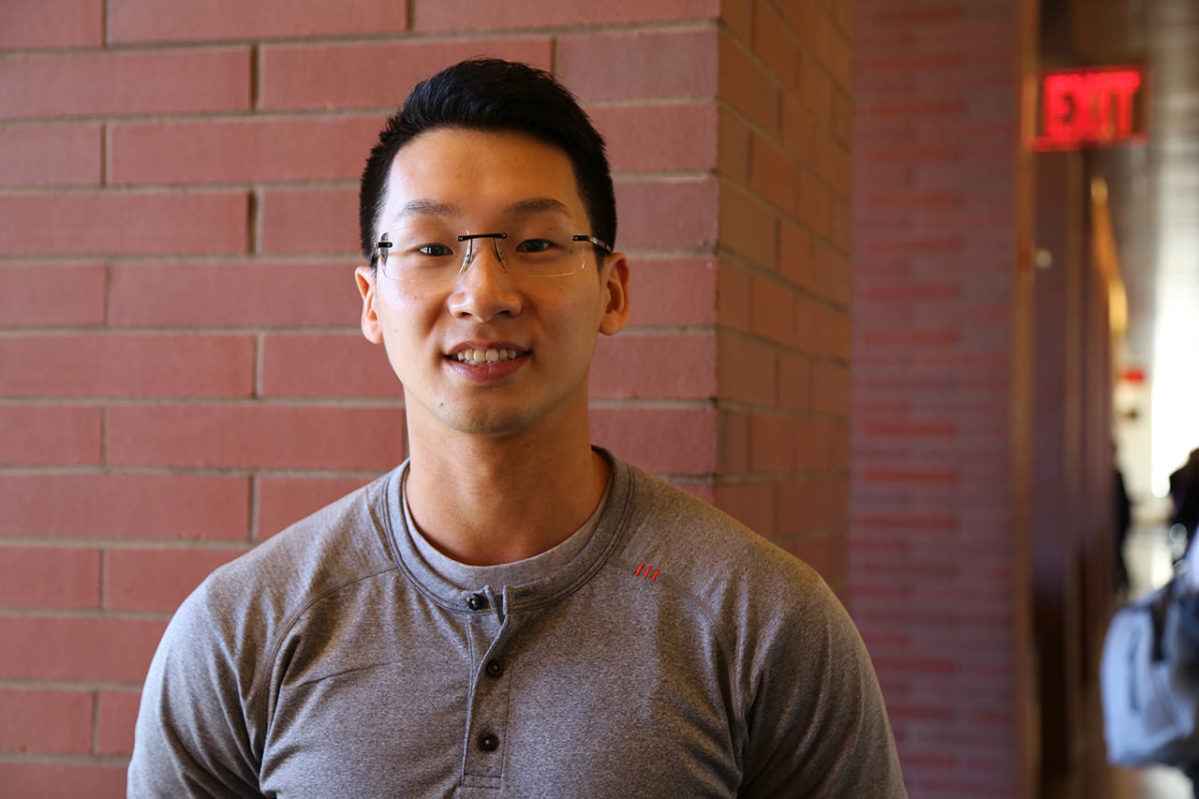 “Right now there’s a complicated situation in the U.S. The country is so divided and there have been negative headlines happen almost every week. I’m here to advocate diversity among Wharton students. In the workplace you will deal with clients from different backgrounds and you need to be welcoming to different viewpoints.”

Jackson Hui, WG’17, G’17, is an investment banker from Hong Kong who has worked in Shanghai, Beijing, and Singapore and competes in Ironman and other endurance competitions. 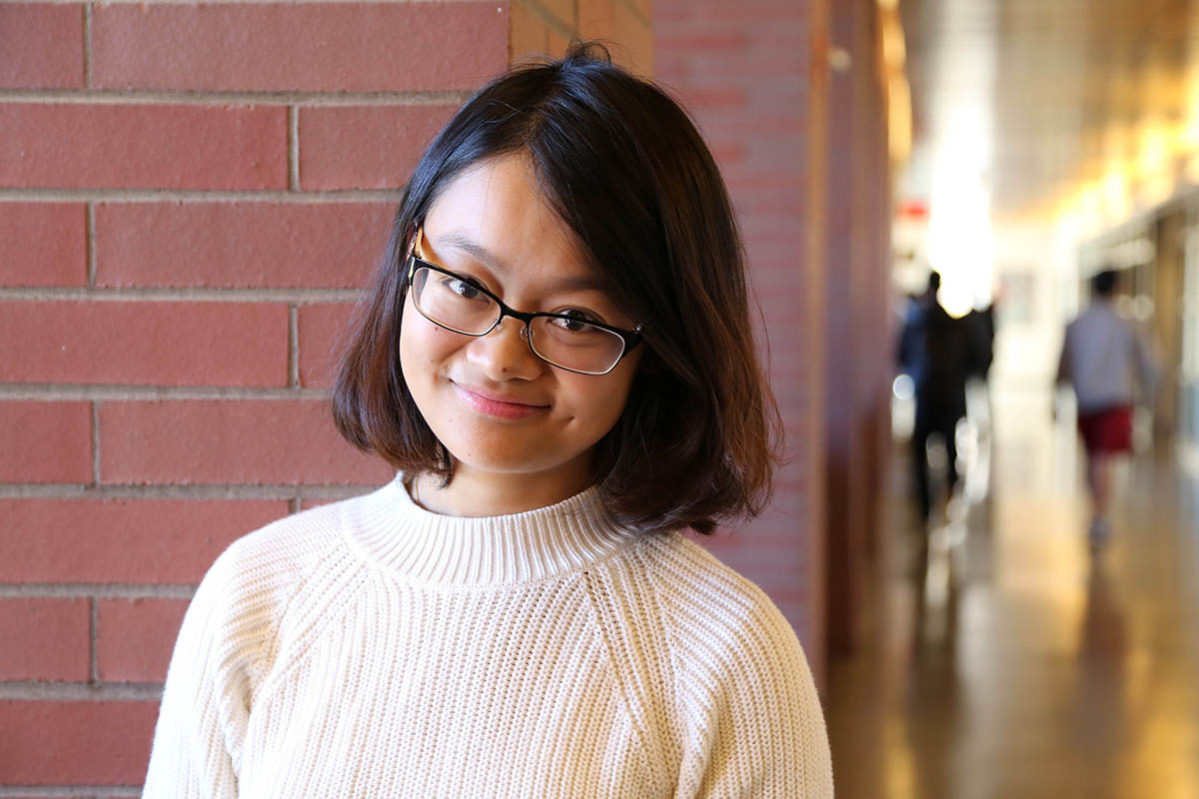 “Cultural differences make Wharton a great place. Those who contain the differences bear the pain of bringing that diversity to the community. If there are occasions when we can incorporate both the majority and minority in the same classroom, it would be even more meaningful, but today was empowering.”

Cindy Dexin Liu, WG’18, earned her undergraduate degree from the University of California Berkeley before working as a strategy consultant at Bain in Shanghai. 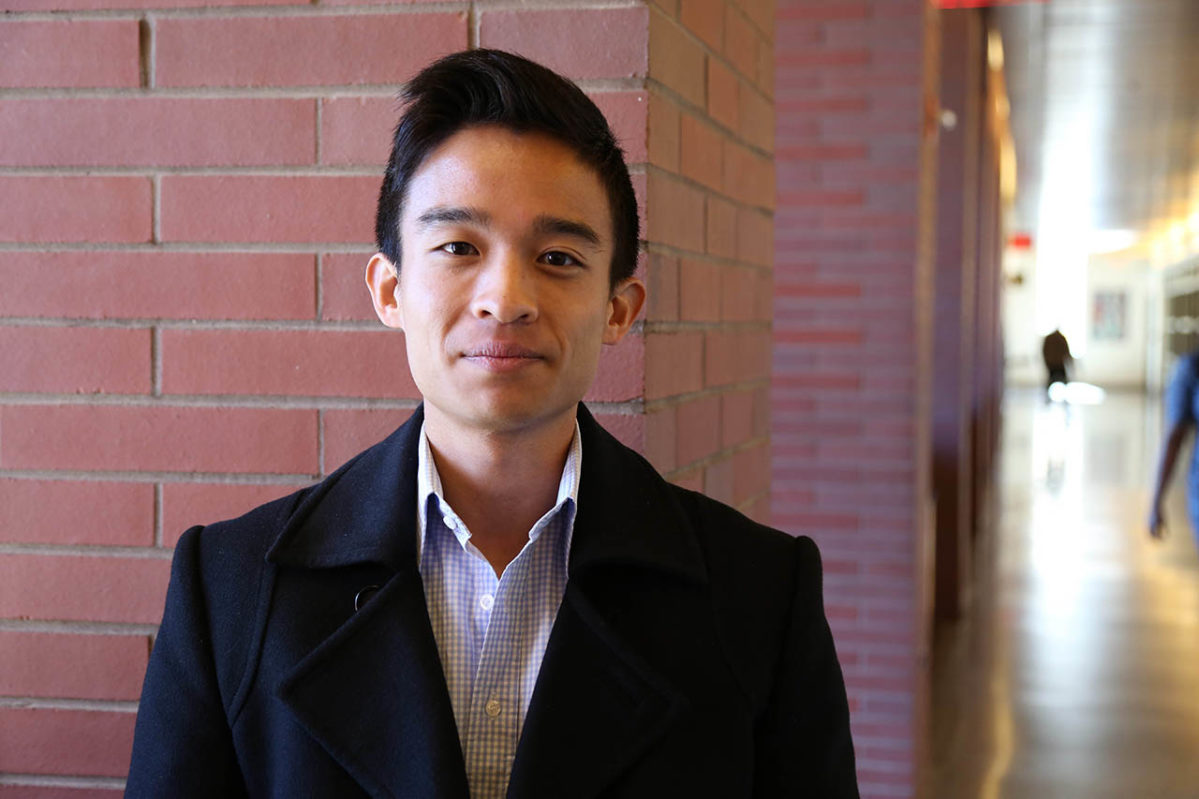 “I grew up in the U.S. and experienced some prejudices firsthand. Wharton is open in general and because it’s such a big class there are always open-minded people to connect with. But just because someone is open-minded doesn’t mean they don’t have implicit biases, for example, the stereotypes that Asians are quiet or avoid conflict. An event like this allows for an opportunity to dispel those stereotypes.”

Kevin Vichyastit, C’11, G’18, WG’18, a member of the Southeast Asia Club, is an investment officer who grew up in Dallas.