Mark Spector, WG’15, director of real estate for the Port Authority of New York and New Jersey, says his interest in the public sector started after college when he coordinated a welfare-to-work program in Minneapolis. It wasn’t until graduate school that he discovered that he also had an interest in real estate.

“I was working for the mayor of Minneapolis during graduate school and started getting plugged into economic development projects. I also took a real estate development course in school and realized that I had a passion for both cities and real estate,” he said.

During his 11 years at NYCEDC, he negotiated the sale or lease of city-owned land to private developers and shepherded projects through public approvals. “The city has different policy and land use goals, and I helped negotiate deals for the public side,” Mark explained.

He pointed to a project in Brooklyn as an example. “We negotiated a long-term lease with a developer to turn an enclosed, under-invested mall into a 1.6-million square foot mixed-use development with housing and retail space.” The development, now largely complete, includes market-rate and affordable housing as well as local Brooklyn and national retailers and a successful food hall.

Working on these transactions with private developers, he noticed that most of the people sitting across the table from him had MBAs. “I started thinking about going back to school to learn how to be more effective at my job. I love the complexity and strategy involved in real estate deals and saw how an MBA could provide a new way of approaching and tackling problems.”

He also saw the importance of an MBA for people working in the public sector. He said, “Public-private partnerships are how we will solve a lot of really challenging public problems. The public sector is resource-constrained so we need to work smarter and creatively through these partnerships and an MBA would help me in these efforts.”

Mark knew about Wharton’s MBA Program for Executives because of Wharton’s reputation in the real estate industry, but his campus visit made the program even more attractive. “The students were focused and engaged in the classroom discussion, and that was something I was looking for,” he said. “It was also clear that this is a strong community of students who support each other, which I believe was due in part to the residential aspect of the program.”

After gaining acceptance in the program, Mark had to decide about the financial investment. “Working in the public sector, I was self-sponsored, so the cost was a concern. However, I looked at it as a long-term investment that would pay off over time. It would lead to growth during and after the program, but that growth would also continue to happen 10 years later. The knowledge, network, and brand stay with you throughout your career.”

Mark noted that the Bendheim Loan Forgiveness Fund also was helpful in the decision-making process. Managed by the Wharton Social Impact Initiative, the fund has awarded more than $1.7 million to alumni pursuing a social impact career.

Since graduating in 2015, Mark has already seen a significant impact on his career. During the end of his first year at Wharton, Mark was promoted to president of the Hudson Yards Development Corporation, where he oversaw one of the largest real estate development projects in the country for the City of New York. Mark and his team partnered with the local transit agency to complete a $2 billion subway line extension to Hudson Yards.

“Working with partners and building on the work of a lot of people, we moved these projects across the finish line,” he said. Hudson Yards will ultimately total over 26 million square feet on the west side of Manhattan.

A year after graduation, he was promoted to senior vice president of asset management for NYCEDC. During that time, he worked on multiple projects, including revitalizing New York City’s public retail markets, which entailed expanding the historic Essex Market as it transitioned to a new home on the Lower East Side of Manhattan, and leading redevelopment planning for a new $30 million La Marqueta public market in East Harlem.

In the spring of 2018, he was named director of real estate for the Port Authority of New York and New Jersey. In this position, he works on finishing development of the World Trade Center campus with private developers and selling properties in the Port Authority’s portfolio to fund projects like a new bus terminal in Midtown Manhattan. “My role is to advance and execute on these projects, so that the proceeds go back to the Port Authority to fund needed transportation infrastructure improvements,” he said.

“Your classmates are doing interesting and innovative things in different industries. You expand your view because of their perspectives.”

“I took Global Modular Courses in India and Dubai. Those types of courses broaden your worldview and bring a global focus to your mindset.”

“You have more ways to take on complex problems based on classes, talking to classmates, and observing how problems are addressed in other countries.”

“Your classmates become your friends, and they remain resources after graduation.”

He added, “I enjoyed that level of engagement with faculty and classmates in school and I try to stay connected with alumni events and reunions. Wharton is a lifelong resource.” 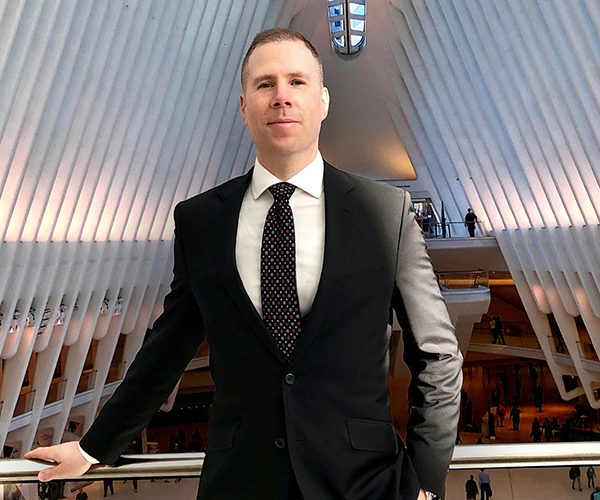