After more than six years as a Special Forces medical sergeant, Thomas Cavett, WG’18, G’18, came to Wharton to work on the launch of an innovative traumatic injury detection device.

Since arriving at Wharton, Lauder student Thomas Cavett, WG’18, G’18, has clinched the Jacobson Venture Award, a $10,000 cash award that supports a student’s entrepreneurial ambitions in lieu of a summer internship. He was also the winner of the Lauder Pitch-It competition at the Global Alumni event in New York City last fall.

The Lauder Pitch-It competition was Thomas’s first business pitch, and he attributes his win to his military experience and Wharton classes.

“Part of it comes from the military-style briefing. You have to be really confident and sure of yourself because if you’re not, you won’t be able to sell the mission,” he said. “That gave me a solid base, but my Wharton classes gave me the confidence to effectively present the business plan and financial models.”

A Story He Was Ready to Tell

In his pitch, Thomas focused on the pain points of his story, which he found easy to tell.

“During my time as a Special Forces Medical Sergeant I treated countless traumatic injuries and developed a real appreciation for the value of timely and effective treatment in saving lives,” he said. “There are hundreds of thousands of people who die from traumatic injuries every year and many of them are preventable.”

“My co-founder and I have over 30 years of combined civilian and military medical experience so because of our backgrounds, that’s something that is real to us,” he said. “Telling that story speaks to people quickly. People understand that this is not just trying to make money. We’re also trying to save lives.”

The pioneering life-saving device behind his winning pitch and entrepreneurial journey is the POWTI, an acronym for Point Of Wounding Trauma Indicator, which will be worn by people in high-risk work or even recreational environments. In the event of a traumatic event, the wearer’s location will be instantly transmitted via cellular GSM and satellite to emergency rescue personnel. This allows for rapid emergency response and consequently, faster arrival to definitive medical care.

Thomas and his team are preparing POWTI for a nation-wide launch next year and early trials on the device have begun. While his co-founder, also a veteran, focuses on product design, Thomas is in charge of the business development.

From securing two U.S. domestic patents and gaining acceptance into the Patriot Boot Camp to securing a $25,000 investment from NextFab Hardware Accelerator, Thomas has seen success in paving POWTI’s launch. In many ways, his involvement in Wharton has contributed to this progress.

One of these ways is through the Venture Initiation Program Community (VIP-C), a Penn Wharton Entrepreneurship initiative. As a member of VIP-C, Thomas has benefited from being among like-minded entrepreneurs.

“The most valuable thing about VIP-C is that these start-up founders are meeting together all the time and helping one another through similar challenges,” he said. “That has honestly been one of the biggest resources.”

How Wharton Is Helping

One other way is learning the technical aspects of business through his classes at Wharton. “Having studied International Affairs as an undergraduate, my academic background is very much based on the humanities,” he said. “One of the biggest things that I hope to get out of Wharton is the data analytical skill set to bring into the business.”

Thomas has been putting into practice the skills and knowledge he has acquired in his classes which have helped him to refine his business model and financial projections. In particular, he credits the communication classes for perfecting his pitch.

“I’ve always been a confident public speaker and done a lot of it in the military presenting to people,” he said. “But it’s definitely different when you’re selling a business rather than a mission.”

Yet, it is the human element that inspired Thomas’s decision to enroll in Wharton in the first place. The people he met at Wharton won him over.

“I could really hear the excitement in their voices when they said that this place is great and the community of people is amazing,” he said. “It’s all about the people and the connections and that was really important to me.”

It is indeed people that Thomas devotes most of his time to outside of POWTI and his studies: he is a husband and a father to a seven-year-old and a two-year-old. Another pillar of support in his life is the Wharton Veterans Club in helping him to transition from military life.

“The Vets Club is definitely one of my biggest support networks at Wharton,” he said. “There are other Green Berets here so we have leaned on each other quite a bit as we transition into the private sector.”

Drawing from his experiences and those of other veterans, Thomas hopes that POWTI will be recognized for its purpose.

“I think the biggest message about the company is that it’s really about saving lives. That’s the whole point of why we’re developing the POWTI device and why we are so passionate about building this company.” 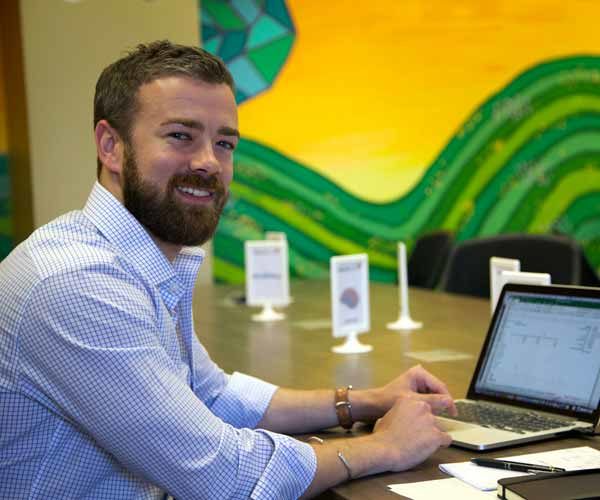