After college, Linda Habgood, WG’98, had two long-term goals: to work at the intersection of trade, policy, and finance; and to get a graduate finance degree with a focus on public-private partnerships. Five years later, a month after landing her “dream job” as an investment officer at the Overseas Private Investment Corp. (OPIC, now the U.S. International Development Finance Corp.), she also was accepted into a full-time MBA program with a full scholarship.

“It was a difficult situation to navigate, but the promise of being able to keep my dream job and obtain my MBA at the same time was so appealing. So, I took a calculated risk, turned down the full-time program, and a year later applied to Wharton’s EMBA program, hoping that in the meantime I could convince the U.S. government to offer me the flexibility to attend!” she recalled.

That turned out to be a great decision. Linda explained, “It was the perfect time to go to Wharton. Every week, I took something from school back to my work in international project finance, and then I brought issues from public-private partnership (PPP) deals right back to the classroom to share with faculty and my classmates.”

After graduation, Linda heard from a former COO at OPIC, who was expanding Delphos International to grow its project finance and trade finance services to companies operating in global emerging markets. He was looking for a vice president with project finance experience and recruited Linda. Today, she is co-chair of the company.

“I’ve been at Delphos for 22 years, but it never gets old. Every project I work on feels like I’m doing something new. An early adopter of working from home, the company has also allowed me to prioritize being a mom and be a great role model to my two sons, who are now both  undergraduate students at Penn,” she said.

Linda pointed out that the company has had to “reinvent itself a few times in the face of economic cycles, but its commitment to quality and innovation has always paid off. Delphos International has earned more than a dozen awards for its innovative finance structures, and has a global reputation as a premiere emerging markets financial advisory firm.”

She noted that many of their deals combine funding from development agencies with capital from more traditional sources. For example, one of her first deals involved structuring a deal to finance distribution companies in El Salvador with a combination of debt from IFC, the private sector lending arm of the World Bank, and a bond insurance company that needed an investment grade rating.

In 2010, Linda bought into the business with two other colleagues and became a partner. She said, “That was an exciting opportunity to get a taste of running a small business and we built a very successful partnership.”

More recently, the company was sold to a publicly-traded EM investment platform called APQ Global and Habgood was named CEO and now co-chair. “It’s been a wild ride trying to grow a business during a pandemic. We’re in the process of deciding what Delphos 2.0 looks like — where and how to expand to capitalize on our knowledge, experience and brand,” she said.

A Commitment to Gender Diversity

As co-chair, Linda is committed to making her industry more diverse. She explained, “Private equity and project finance are notoriously male-dominated industries. I am passionate about ensuring that my firm is at least 50 percent women at all times. And when people send me pitch decks with only a token woman on the senior leadership team, it is the first thing I call out as a weakness. Ignoring the power of diverse teams is old fashioned, and the investment community needs to set new standards. Otherwise, we will stay stuck inside of an unproductive and under-performing echo chamber.”

“Women need to be taking fuller advantage of their networks, sharing insights on issues like promotions in male-dominated organizations, negotiating salaries, capitalizing on connections, and offering strong and supportive advice and insights.  There is still a lot of work to be done to achieve equality in responsibility and pay,” she said.

The first virtual meeting of EMBA women was held with 17 attendees right before the pandemic. “Virtual meetings are common now, but at the time our goal was simply to encourage women to come together at the end of the day, to ‘come as you are’ to share experiences, ask questions, and get help,” noted Linda.

The idea has been a success, with more than 100 women signing up for the second event and similar attendance throughout the summer and fall.

“There are so many interesting and successful Wharton EMBA women, and I am so excited to be working with Stephanie to make this happen. It’s been so gratifying to see how much we have all benefited from the shared connections. It is an incredibly special network,” said Linda. 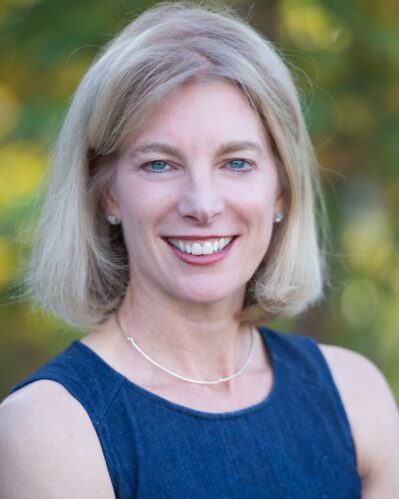 Based In
Westfield, NJ