How can NFL teams utilize data to improve their defense?

This is the question a team of Wharton students sought to answer when they entered this year’s NFL Big Data Bowl, a competition that encourages members of the analytics community to come up with innovative ways the NFL can use their high dimensional tracking data. Zach Drapkin (W’22), Sarah Hu (W’23), Zach Bradlow (W’22), and Ryan Gross (statistics PhD student), teamed up to analyze datasets from the 2018 season in order to measure defensive performance against passing plays. Drapkin, Hu, and Gross are all current teaching assistants for Moneyball Academy through the Wharton Sports Analytics and Business Initiative, and Bradlow is a former Moneyball Academy student.

Bradlow said he was excited that the prompt focused on a different part of the game of football.

“Something that was really cool for me was that there are so many stats about offense. There’s a lot out there about quarterbacks and wide receivers, but there isn’t as much out there about the defensive side of the ball, so when I saw the prompt I was really interested. It gave us a lot of opportunity to do some really unique things that hadn’t been done before,” he said.

Their project took them all the way to the final round. 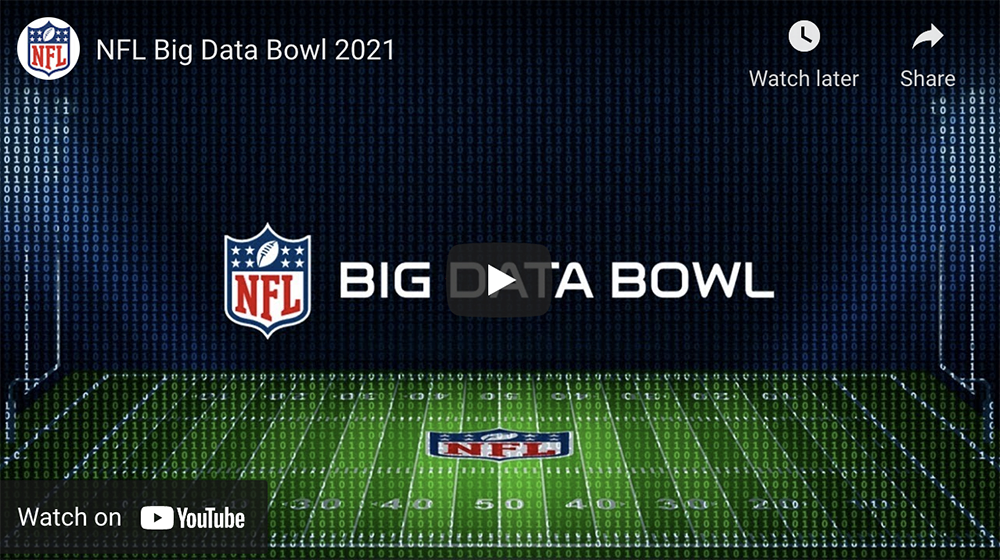 The NFL has a sophisticated data tracking operation powered by Radio-Frequency Identification (RFID) sensors that are embedded into each player’s shoulder pads and in the football. Captured at 10 frames per second, these trackers allow the NFL to collect real-time data on every player during every play of every game, such as players’ speed and location on the field. These data sets are then used by the NFL’s Football Operations group to compile a detailed breakdown of gameplay situations and player performance.

Because such a large amount of data is collected, Drapkin, Bradlow, Hu, and Gross were tasked with condensing millions of rows of data before they could run analytical models and draw out any insights needed for their project presentation. The team decided to narrow their focus on passing plays that were man-to-man coverage of a wide receiver against a cornerback—as opposed to zone coverage—and noted who “won” each play, regardless of whether the ball was thrown their way.

Drapkin described it this way: “After we decided to just pick the man-to-man coverage routes, we decided that we’d use a model from the routes where the receiver was ‘targeted’ to make predictions on the ‘un-targeted’ routes. That way, we were able to get success probabilities.”

Using Elo and Bradley–Terry statistical models, they were then able to assign each player a ranking and compile a list of the best cornerbacks in the NFL for the 2018 season. Then came the fun part: being able to see if their personal predictions aligned with the data outcomes.

In order to put together business insights, the Wharton team cross-referenced salary data from 2018 and paired it with their own ratings. They found a positive correlation.

“Getting to see our rankings of the cornerbacks and wide receivers at the very end was the most fun part for me. We had, for example, New England Patriots Cornerback Stephon Gilmore (ranked high on the list), which we expected, but we definitely had some surprises in there, like (former 2018 Carolina Panthers cornerback) Captain Munnerlyn who you wouldn’t really expect to be up in the rankings, but that’s what the data showed,” Hu said.

Gross added, “When you’re running these models, you have no idea what the actual output is going to be, so just being able to get some results and see that they matched up with our intuition about who was a good player was really satisfying for us to see,” he said.

In their final Big Data Bowl project presentation, filmed over video conference earlier this year, the Wharton team explained to judges that because their findings matched up with real player rankings from the 2018 season, the NFL could use their models for talent acquisition and roster management.

Drapkin said, “We demonstrated that if teams had used our model in 2018, they could have found undervalued cornerbacks before the rest of the league knew how good they were.”

The analysis could also be used for better match-ups across teams.

Because of the nature of Elo and Bradley–Terry models, the Wharton team was able to calculate the probability of a specific player “winning” a one-on-one match up in a given play. This would allow NFL defensive coordinators to decide which players they want to cover all the other’s teams’ wide receivers,

“You could calculate the probability of every cornerback-wide receiver match-up for your team, and figure out what combination of that maximizes your probability of winning all the routes on a given play,” Drapkin said.

The Wharton team used a hypothetical game of the New England Patriots vs. the Green Bay Packers as an example. The students found that it was possible to improve the probability of winning all the routes by two percentage points, just by choosing the right player match-up.

Bradlow explained why this was impactful.

“Two percent might not sound like a lot, but teams would pay a lot for a two percent marginal gain on every single play. If you think about it, an extra two percent would be worth tens of millions of dollars to teams,” he said. “Imagine if they had this 5-wide on every play. There could be really large efficiency gains to be had.”

Though Drapkin, Bradlow, Hu, and Gross didn’t win the competition this year, they said it was an honor to be included as finalists. Despite a few late nights of praying that their computers didn’t stall out, the team said the experience was rewarding.

Gross said, “For most of us, this was our first experience working with this type of data, and we learned a ton.”

Bradlow added, “A lot of analytics research that gets done is just between you and your computer, and it can get a little lonely. It’s fun when you get your own output, but you don’t have anyone to celebrate with, so being on a team (with Hu, Drapkin and Gross) was a cool experience.”

“I think all in all, it was really cool for us to be able to see the work of the other groups’ submissions. We saw ways that we could’ve improved our own project and ways we could expand on it in the future,” Hu said.

For Drapkin, becoming a Big Data Bowl finalist was validation of everything he’s learning at Wharton.

“It shows that all the things we’ve been learning in terms of analytics means something and (it proves that) we’re at a good level in college—that we were able to keep up with other people in this business,” he said. “It shows that we’re ready and have the skills to do the work that NFL teams desire, so that’s really gratifying.”

The NFL Big Data Bowl, now in its third year, is an annual sports analytics contest from NFL Football Operations that challenges members of the analytics community – from college students to professionals – to contribute to the NFL’s continuing evolution in the use of advanced analytics. The Big Data Bowl is the league’s next step in engaging the analytics community. Contestants use traditional and Next Gen Stats to analyze and rethink trends and player performance, and to innovate the way football is played and coached.

This year, the competition received nearly 200 submissions, representing data scientists from all over the world. There were eight finalists in total – three college teams and five teams from the “open” part of the competition. The judges this year were:

An awards ceremony is typically held at the NFL Scouting Combine in Indianapolis, but this year the presentations and awards announcement were filmed over video conference. 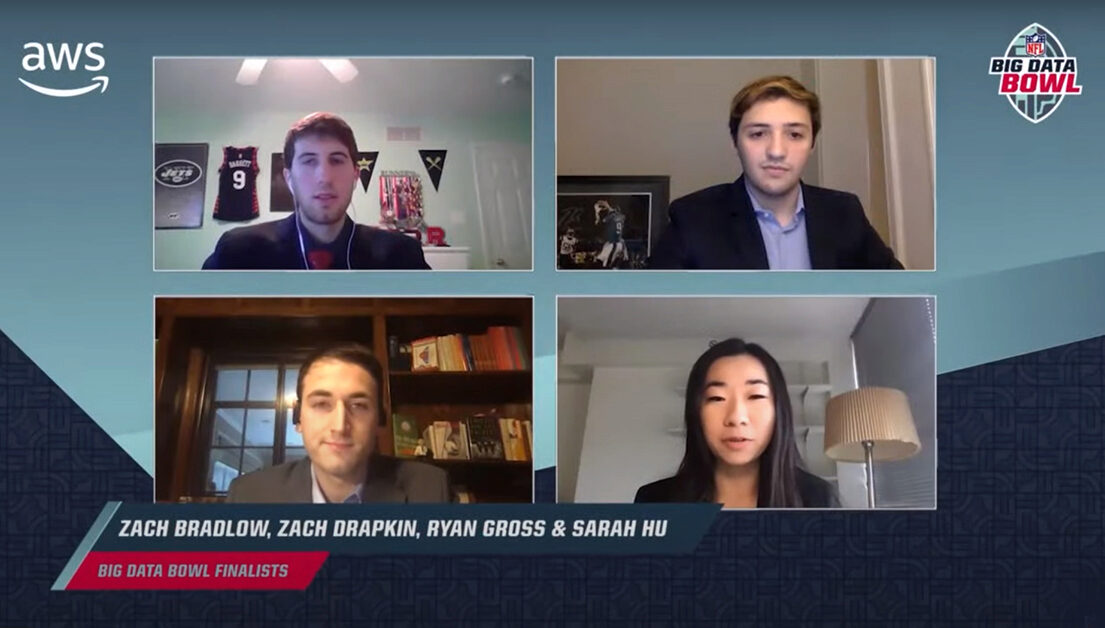