Wharton Stories » MBA, Philanthropist, and Former NFL Player Asks MBAs to Pledge ‘One for the World’

MBA, Philanthropist, and Former NFL Player Asks MBAs to Pledge ‘One for the World’

Justin Tuck, WG’18, entreated students to participate in the Wharton-founded One for the World movement by pledging 1% of their post-MBA salaries to philanthropy.

Four years ago, a Wharton MBA urged successful professionals to donate 1% of their income to charity as part of a persuasive speech assignment. One of his classmates thought it was a great idea. Together, they started One for the World, which now strives to make charitable giving easy and effective for new professionals. The organization is currently expanding its chapters to universities all over the country.

Justin Tuck, WG’18, previously captain and defensive end for the Giants and Oakland Raiders, was a special guest at One for the World’s “lunch and learn” event on April 4 in Steinberg Hall-Dietrich Hall. His message: the importance of giving now.

Giving One for the World

“‘If I wait to give, I’ll have more impact when I have more money.’ That excuse doesn’t really fly. I hear that excuse from billionaires,” Justin told his fellow classmates. “One percent won’t make much difference on your balance sheet, but it can make a lot of difference in the world.”

In the past, Justin has given talks at Wharton on philanthropy and charitable giving, and his belief in “giving now” resonates deeply with One for the World’s mission. Co-President of Wharton MBA chapter, Mary Johnston, WG’18, said a few simple steps can make a big difference. “All you have to do is give your name and your Paypal account, and we can make sure your dollar goes to the most impactful place it can possibly go.”

A pledger himself, Justin highlighted the organization’s dedication to effectiveness. “One for the World has lowered the boundary of entry for giving to kaput. I don’t have to due diligence on how much of what I’m kicking in is furthering the mission – they’ve done that for you.”

Anyone who pledges 1% or more can choose among 18 charities, carefully selected by The Life You Can Save, an initiative started by Princeton philosopher Peter Singer in 2013. The initiative seeks to raise annual donation amounts, specifically for highly impactful nonprofits.

This year has been Wharton’s most charitable so far – the MBA Class of 2018 pledged a total of $86,867, with 13% of the entire class participating. Of those donations, 97% will be guaranteed to philanthropy instead of overhead.

Vice President of One for the World’s Wharton MBA chapter, Glenn Branscomb, WG’18, explained pledging can be a “first step” into philanthropy for graduates. “We believe that MBA students will be more money rich than time rich, and that the marginal sacrifice we make in money will have more of an impact than time.”

Online, pledgers have the option to set a start date for their donation up to a year in advance. “Getting people to start giving now means they will get into the habit of giving,” Mary said. “In the future, they’ll generally become a more philanthropic person.”

Mary emphasized that potential donors should know the impact they can have. Since 2014, One for the World has given 400 years of healthy life to people around the world, clean water to more than 28,000, health products and services to more than 10,000, and much more to various causes. In the future, the Wharton MBA chapter is considering starting a faculty board, as well as engaging alumni who want to contribute to the effort.

It’s Justin’s hope as well to involve more of his classmates in philanthropy. “I feel obliged to give back because God has blessed me with a platform. Now, I’m in the classroom at Wharton with all this intellectual capital,” he said. “We all have bright futures here. My hope is that we all ensure that others have bright futures as well.”

One for the World

One for the World is a movement dedicated to identifying where charitable donations can have the greatest impact. One for the World uses rigorous, data-driven charity selection to find the most effective charities to donate to. Since 2014, One for the World has grown to over 300 members, building a movement across six schools and young professionals at many top companies. 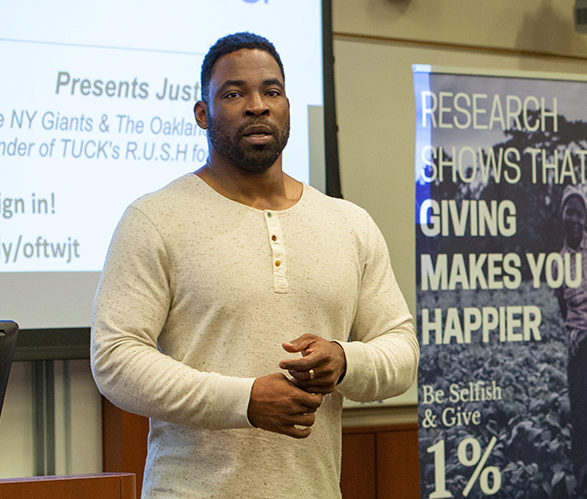 Charity has always been a part of Justin Tuck’s life. He grew up in small-town Alabama with seven siblings and his parents always found a way to help people out, donating food from their family farm when that was all they had to offer. From them, he learned to always be of service, no matter where he is in life.

Justin attended charity events once or twice a week while he was still in the NFL, but wondered what the money was actually going to. During the off-season, he and his wife, Lauran, reconsidered how they could support the causes they were passionate about, beyond just writing checks.

In 2008, they founded a charity for children’s education called TUCK’s R.U.S.H. for Literacy, which provides learning opportunities for low-income youth in New York, New Jersey, and Alabama. To help children read and succeed, they have distributed thousands of books to schools, held essay contests, and recently expanded to grantmaking.

Justin explained why he first started his own charity and why he and Lauran have recently shifted strategy to support other organizations as well.

“Being sponsored by companies, I thought it would be easy for me to raise money,” he said. “And at the time I wanted people to see that Tuck was doing this — that it was my effort. But as I’ve grown personally and in this space, we’re also creating endowments and making grants to support other companies that are doing this kind of work.”

What matters most is beginning to give.