“Most of the things you see talked about as sharia law are actually prohibited by sharia law,” Patricia said. “All the Muslims I know never even knew who Osama bin Laden was until he showed up on CNN. Those people are not the people who we listen to.”

Last Tuesday evening, more than 60 students filled the seats of a second-floor classroom in Huntsman Hall for “Ask Me Anything: I’m a Muslim.” Co-sponsored by Wharton’s Muslim Student Association, the 90-minute panel discussion on Feb. 14 rounded out the second day of Return on Equality Week at Wharton.

This is the second year that the ROE Coalition has sponsored the weeklong series of events to nurture and advocate for equality and inclusion across lines of difference on campus.

“Working with ROE was important in terms of marketing and getting the word out to a wider audience because getting a bigger audience, especially one that is willing to engage on a serious topic that people may feel does not impact them is always a struggle,” said Ash, a second-year MBA student at Wharton and co-president of the Muslim Student Association.

Hosted and moderated by Huda, a second-year MBA student at Wharton, the candid Q&A featured six Muslim panelists from a wide variety of experiences, backgrounds, and cultures (see sidebar). Hailing from Austin, Texas to Lahore, Pakistan, some were raised in the Islamic faith, some grew up in multifaith households, and some converted as adults.

Sharing their personal views and experiences, they fielded a wide range of questions from the audience and some that had been submitted anonymously online. During the conversation, they cleared up several common misconceptions about Muslims and highlighted four key points you may not have known about Islam:

1. Muslims worship the same God as Christians and Jews.

Whether you’re reading the Quran, the Torah, or the Bible, these sacred texts all refer to the same God. “Allah is just the Arabic word for God,” explained Buhari, a first-year MBA student at Wharton. “Those in the Christian and Jewish faiths who speak Arabic also call God ‘Allah.’”

Like Judaism and Christianity, Islam promotes God as the ultimate authority and shares the core belief that God sent prophets to relay his messages. “The Prophet Muhammad is considered to be the last of a long line of prophets who delivered a final message to humanity in form of the Quran,” said Zuhair, a second-year MBA student at Wharton.

Muslims believe in many of the same prophets in the Jewish scripture and the New Testament, including Abraham, Moses, and Jesus. “You cannot believe in Islam without believing in Jesus,” said Maryam, a second-year MBA student at Wharton.

Jesus is an important prophet in Islam. While Muslims do not believe in his divinity, they do believe in the virgin birth of Jesus; in fact, the Virgin Mary’s name appears more frequently in the Koran than it does in the New Testament.

2. Islam has a culture and history of women empowerment.

As a young woman, Maryam had a crisis of faith when she asked herself how she could be a Muslim and a feminist. She took a closer look at the history of Islam. “I realized our history is full of badass Muslim women,” Maryam said. “My religion actually encouraged me to be more feminist because I realized God is with me.”

In the Quran, the sacred text of Islam, women and men are described as equals in everyday actions and responsibilities. For more than 14 centuries, millions of Muslims have walked in the footsteps of one devout woman — one of rituals of the Hajj, the sacred yearly pilgrimage for Muslims, follows the path of Hajer as she sought to find water in the desert for her son, Ishmael.

The Quran includes many strong feminine role models, including Khadija, Muhammad’s first wife. She was not only the first convert to Islam, she was a financially independent businesswoman and landowner who was older than Muhammad and had been divorced.

“Their stories are meant to encourage and empower women who read them — women of Islam,” said Ash, who describes himself as a feminist, although he dislikes the label. “Islam is an egalitarian religion that sees everyone as equal in the eyes of God.” 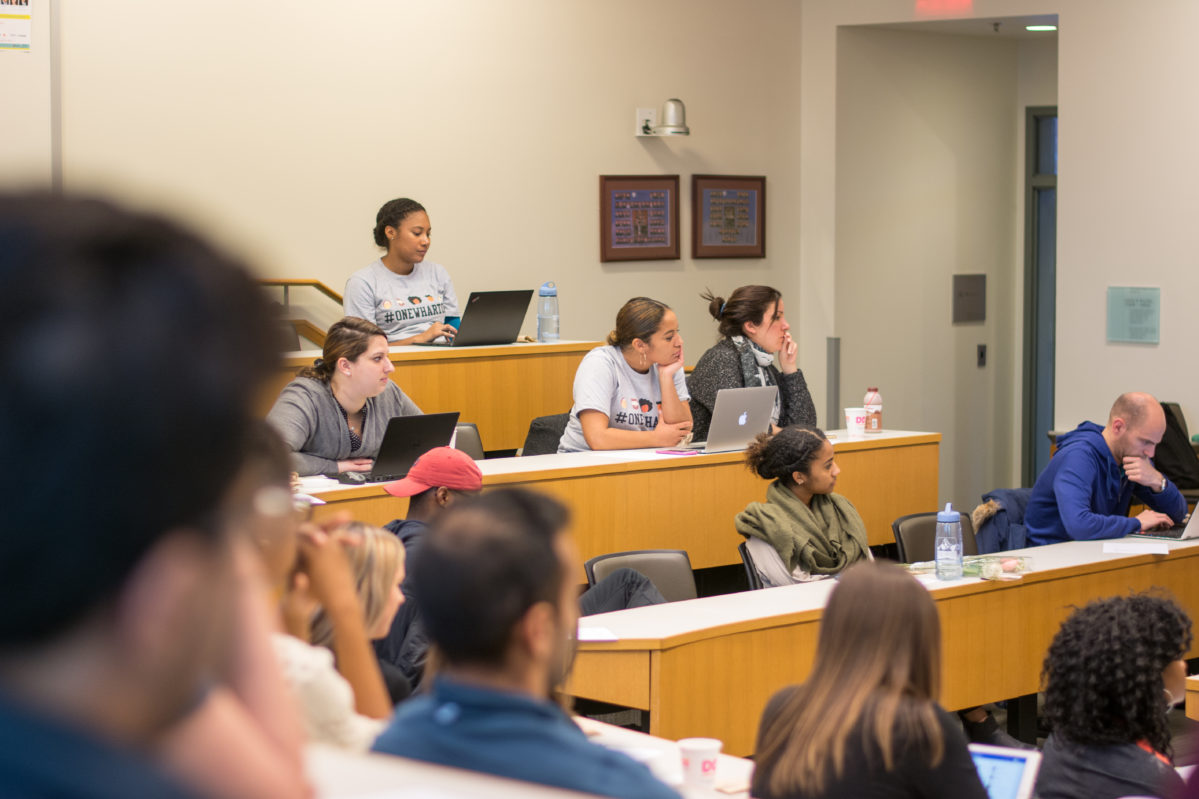 In response to a question from the audience, the panelists discussed the misperception — even among many Muslims — that Muslim groups and leaders do not sufficiently denounce acts of terrorism. “Every time there’s a terrorist attack, Muslim leaders put out condemnations, but condemnations don’t typically go viral,” said Patricia, chaplain of Penn’s Muslim Student Association.

The word Islam, which means “submission,” is related to the Arabic word salaam, meaning peace. “Islam is rooted in peace, but it means more than peace,” Ash said. “It’s surrendering or submitting to God’s will and attaining peace as a result.”

What about the violent verses in the Quran? Like the violent passages in the Old Testament and the Torah, they must be read in context. Ash explained that terrorists use radical interpretations of Islam, often inaccurately or selectively quoting verses from the Quran that were meant to regulate warfare in the early days of Islam and applying them to contemporary times.

When Buhari was growing up in Nigeria and learned of the terrorist attacks in New York on 9/11, he struggled to understand how it could be related to his faith. “I wondered how can peace promote terrorism?” he said. “After much research and study, I realized that much of what is reported is conflating regional and political conflicts with religious ideology.”

4. The religion of Islam is not the same thing as the culture of some Muslim-majority regions.

“It is fundamentally important to distinguish between culture and religion,” Maryam said. “A lot of the negative practices attributed to Islam are actually cultural or social ills that predate the religion, or are culturally specific to the regions where they happen, and can be rooted in patriarchal power structures, toxic masculinity, or most simply often, just a lack of education and awareness.”

Islam does not condone — and actually condemns — practices such as the oppression of women, banning women from education, and “honor killings.”

“Most of the things you see talked about as sharia law are actually prohibited by sharia law,” Patricia said. “All the Muslims I know never even knew who Osama bin Laden was until he showed up on CNN. Those people are not the people who we listen to.”

With 1.6 billion followers, Islam is the second-largest religious tradition after Christianity and its followers are spread out across the globe. While there are many Muslim-majority countries in the Middle East and North Africa, nearly two-thirds of Muslims live in the Asia-Pacific region. In actuality, Islam is anything but monolithic, it’s a religion practiced in many different cultures.