Wharton Stories » How an Biotech Entrepreneur Earned an MBA, Pulled off an IPO, and Made Advances to Solving a Medical Problem

How an Biotech Entrepreneur Earned an MBA, Pulled off an IPO, and Made Advances to Solving a Medical Problem

“There is a big biotech scene in San Francisco and I wanted to be part of that ecosystem at Wharton.”

When Andrew Ritter, WG’16, founder and CEO of Ritter Pharmaceuticals, was a student in the Wharton MBA Program for Executives in San Francisco, his company went through an IPO to raise capital to take his business to the next level. You could say that it was a busy time, but you’d be underestimating.

“I had to lead a two-week road show to pitch our deal to investors and, between new city visits, I’d take red-eye flights to San Francisco for class. Then I’d take a red-eye flight back to wherever we were on investor tour,” he said.

The stress was worth it. Andrew raised the money and earned his MBA, and Ritter Pharmaceuticals is now one of the leading biotech firms conducting research and development on the human gut microbiome. It’s working to develop the first FDA-approved treatment for lactose intolerance.

A New Solution and a Personal Quest

Ritter Pharmaceuticals began as a personal quest by Andrew to solve his own lactose intolerance. “The condition dramatically affected my overall lifestyle and health. After years of suffering from this condition, I contacted experts from around the country to design and develop a better treatment. I used myself as a test subject and we formulated, developed, and tested a compound to treat my own lactose intolerance,” he said, noting his first prototype was developed when he was in eighth grade.

When Andrew started Wharton’s EMBA Program, he already had years of entrepreneurship experience under his belt. Having launched his company during his junior year in college, he learned much about business on the job through trial and error. He came to Wharton to get a formal education in management and finance, and gain a more holistic view of business to manage his company’s growth.

He also wanted to meet people in different industries to broaden his horizons and explore new ideas. “There is a big biotech scene in San Francisco and I wanted to be part of that ecosystem at Wharton,” he said.

Why He Needed an MBA

Some entrepreneurs think that going back to school isn’t worth their time because their business is more important. Andrew believes it’s just the opposite.

“Wharton’s MBA Program for Executives makes you a better entrepreneur because it forces you to be more efficient with your time and resources, and it gives you new perspectives and ideas that will benefit you and your company,” he explained.

As for being an entrepreneur while in school, Andrew said, “I could better appreciate and absorb the content because I had lived and experienced the content. I could pull exactly what I needed out of my classes and fill in knowledge or skill gaps.”

A political science major in college, Wharton provided Andrew with a more analytical way of looking at business. He explained, “I gained new perspectives and models to interpret and evaluate business decisions, which was refreshing.”

As Ritter Pharmaceuticals gains headway in its mission, it’s also attracting a lot of media attention. Andrew was recently featured in the Los Angeles Times and on CNBC.

The network was — and continues to be — very beneficial as well. “I was exposed to new ideas and introduced to new perspectives on business, personal, and cultural issues by the faculty and my classmates,” he said. 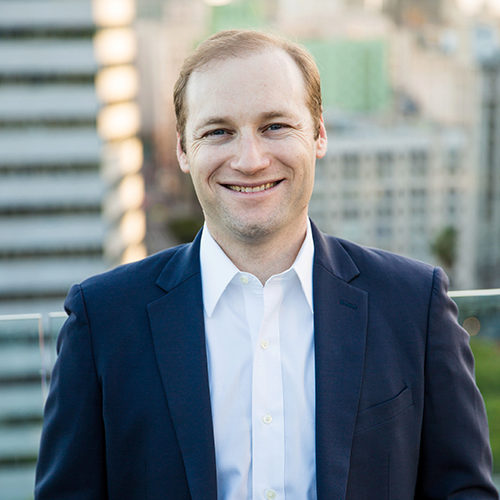 Prior Education
University of Southern California, BA in Political Science